Start a Wiki
watch 01:50
The Loop (TV)
Do you like this video?
Madame Rontru (Marie Windsor) was the villainess in the 1955 comedy adventure "Abbott and Costello Meet the Mummy".

Madame Rontru is a criminal business woman who is looking for a sacred medallion in order to find the secret to a buried treasure of Princess Ara.  She offers to pay Freddie Franklin (Lou Costello) $5,000 for the medallion, but he accidentally eats it first.  After x-rays reveal the medallion's secret, Rontru and her two henchmen set out with Pete Patterson (Bud Abbott) and Lou to find the treasure.

After Rontru was attacked by Klaris (Eddie Parker), Costello accidentally blows the mummy up with dynamite lit by Rontru.  She and her two sidekicks were arrested for attempting robbery. 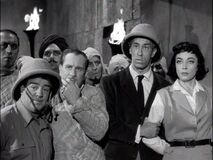 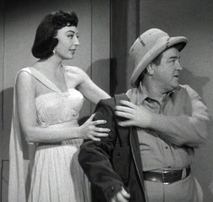 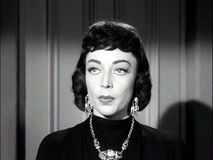 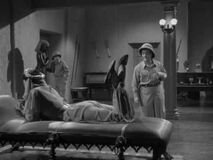 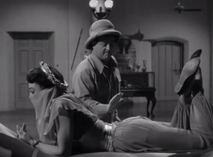 Add a photo to this gallery
Retrieved from "https://femalevillains.fandom.com/wiki/Madame_Rontru_(Abbott_and_Costello_Meet_the_Mummy)?oldid=178297"
Community content is available under CC-BY-SA unless otherwise noted.