Start a Wiki
watch 04:10
The Loop (TV)
Do you like this video?
Madame Poppycock's Henchwomen are minor antagonists in the webcomic "Death P☆rn" by El Cid.

Also referred to as "Cyber Dykes" by the baroness herself, these female soldiers serve Madame Poppycock - one of the main villains in the story. Led by Liz, they help capture, torture and kill countless slaves for Poppycock's amusement, as well as their own. Many (if not all) are killed themselves by protagonists Carmen, Angie and their friends.

A couple with Liz, capturing Carmen and Angie... 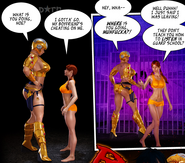 ...but it comes in handy for a diversion. 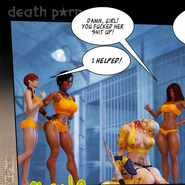 Add a photo to this gallery
Retrieved from "https://femalevillains.fandom.com/wiki/Madame_Poppycock%27s_Henchwomen_(Death_P%E2%98%86rn)?oldid=209649"
Community content is available under CC-BY-SA unless otherwise noted.