Start a Wiki
watch 01:50
The Loop (TV)
Do you like this video?
Mabel is the primary antagonist of the 1986 Italian sci-fi horror comic "Storie Viola #10: La Vergine Corrotta". She was created by Carmelo Gozzo (story).

Mabel is a seemingly normal woman, with a husband as well as a daughter, Lucy, who she adopted after her sister died during childbirth. Below the surface, however, she has a dark, sadistic side, which includes attending  parties with a few of her friends where they get to torture prostitutes.

One day while Mabel is at work, a strange man visits her home and uses an age-progression ray on Lucy. His reasons for this are that he has been sent to find a human female who is sexually depraved, incestuous and a murderer, and after several failures, figures that this girl is as good as any other.

When Mabel arrives home with her husband, a now-grown-up Lucy rushes to her, trying to explain what happened. Not believing for a second that this is actually her niece, Mabel's confusion quickly turns to elation. Taking her husband aside, she rejoices that they actually have a mentally handicapped complete stranger at their disposal.

Mabel takes Lucy down to the cellar and then proceeds to rape, torture and kill her, while also taking a moment to remind her husband of her personal fear of traditional, penetrative intercourse. The strange man witnesses all of this and is astonished to realize that the one he was looking for all this time was not Lucy, but Mabel. The man immediately abducts the murderess and takes her to a faraway island, where he reveals that he is a descendant of a forgotten, hedonistic culture which existed on the lost continent of Mu. He further adds that the pact which enabled his people to be saved can only be upheld with the offering of a virgin woman whose actions bear the very vileness of man.

The story ends with Mabel pleading for her life as the priests of Mu prepare to ritualistically sacrifice her.

Mabel's friend informs her of a new victim she's found for the party...

"If it were up to you, you'd skin her, butcher her and burn her!" she playfully reminds.

Slapping Lucy for "making up stories about the strange man". 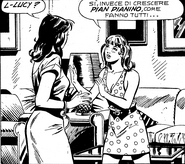 ...and refusing to believe her right up until the very end. 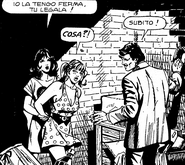 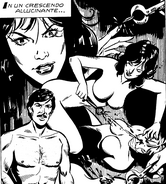 Retrieved from "https://femalevillains.fandom.com/wiki/Mabel_(Storie_Viola)?oldid=207074"
Community content is available under CC-BY-SA unless otherwise noted.