Isabella Carmela Magdalena "Ma" Gnucci is a Mafia matron in The Punisher comics and in the 2004 video game (where she is voiced by Saffron Henderson), ruthlessly ruling the Gnucci Family crime syndicate controlling unions, illegal gambling, and drug-running. She obsessively wants vengeance on the Punisher (Frank Castle) for the deaths of her brother and sons, and later for also maiming her (in the comics), until she is brutally killed by him in the end.

In the comics, Frank Castle feeds Ma Gnucci to polar bears in a zoo and leaves her for dead as the animals maul her. Later it is revealed she has survived this, however losing all her limbs. But she still plots his death, so Frank later comes back and burns "the old witch" alive by kicking her "back to hell" into the fire in her mansion, this time making sure she stays dead and finally ending her vendetta.

In the game, Ma does not fight (too). After exterminating Gnucci men over the course of previous missions, the Punisher grabs her (here still with legs and arms) and throws her twice headfirst at a reinforced glass window at the top of the Gnucci Estate until it breaks and she falls down. She can also be killed in a variety of other ways.

Official guide: "With Bushwacker out of the way, it's now time to pay a visit to Ma Gnucci. (...) After you enter the secret passage, take aim at the sprinklers and shoot them to put out the fire in the way. From there, head to the rear right and turn off the security doors. And, finally, we find Ma Gnucci. Walk over, grab her, and execute the Special Kill splash on the ground to finally nip this lineage in the proverbial bud." 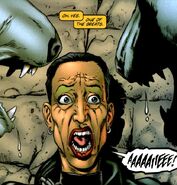 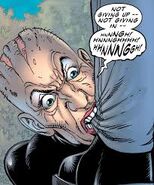 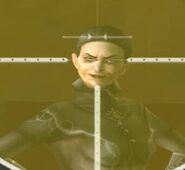 Retrieved from "https://femalevillains.fandom.com/wiki/Ma_Gnucci_(The_Punisher)?oldid=197415"
Community content is available under CC-BY-SA unless otherwise noted.