Maïssa is a secondary villainess from the action movie The Transporter: Refueled (2015). She is played by the actress, Noémie Lenoir.

Maïssa is a former street hooker who has worked her way up to become a Russian kingpin’s second in command. Together, they control a prostitution ring and crime network on the French Riviera, and Maïssa has come to lead a debauched life of luxury. A gang of three girls led by Anna, are out to get their revenge against the pimp who mistreated them when they used to be teenage prostitutes under his brutal jurisdiction. They kidnap the “transporter’s” father in order to force the hero into helping them get their payback. Over time, this forced collaboration grows into a sincere partnership between Frank, Anna and the others, and they take on the gangsters together.

Eventually, the heroes provoke a shoot-out between rival gangs on a yacht. While the villains, including Maïssa, are distracted, one of them, Gina, secretly boards the yacht as a diver, logs into Karasov’s bank account and begins relieving it of a huge sum of money. Maïssa notices on her tablet that someone has logged into the account, and decides to hunt down the intruder. She quickly finds Gina and furiously shoots her into the chest, but fails to kill her. The greedy Maïssa seems more interested in interrupting the money transfer than in neutralising her adversary completely, a mistake that she will fatally come to regret. As she puts down her pistol and frantically tries to gain access to the account, the injured Gina grabs a rope and slings it around the evil Maïssa’s neck. The villainess, probably now wishing she had finished off her victim earlier, suddenly finds herself at the short end and desperately tries to reach her gun. However, the heroine is now very determined not to let her would-be assassin off the hook and mercilessly strangles the bad girl to death. Maïssa struggles desperately to free herself, but without success. Grimacing from pain and terror, she nears asphyxiation and finally expires. As Gina lets go of the rope, Maïssa’s slackened body curls up and falls forward. The exhausted Gina is later rescued by Frank Martin Sr. As the heroes reunite over the motionless body, they pay little attention to what remains of the defeated villainess. 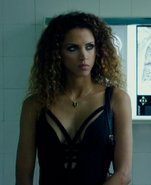 Heroes reunite over Maïssa's dead body.
Add a photo to this gallery
Retrieved from "https://femalevillains.fandom.com/wiki/Ma%C3%AFssa_(The_Transporter_Refueled)?oldid=210927"
Community content is available under CC-BY-SA unless otherwise noted.