Start a Wiki
watch 01:48
The Loop (TV)
Do you like this video?
Lydia is a ghost Danny encounters in Danny Phantom.  She appeared from 2005-2007.  Lydia is voiced by Tara Strong.

Lydia is Freakshow'sloyal ghost partner, and the only one who obeys him even when she's not being hypnotized. Her most notable characteristic is that her body is covered in tattoos that she can bring to life and control. At no point in the episodes she appears in does she say a single word. However, she does scream when Danny transforms her into various objects in "Reality Trip" and she also screams in rage when Danny traps Freakshow in the Fenton Thermos.

Lydia first appears in "Control Freaks" as Freakshow's most loyal minion. Like his other ghosts, she performs in Circus Gothica and commits crimes by utilizing her ghostly powers. But unlike the other ghosts, she still serves Freakshow willingly and does not abandon him when Danny breaks his staff and thus the hypnotic power over the ghosts.

She, along with Freakshow, appears again in "Reality Trip." At the beginning of the episode, she has been captured by the Guys in White and is used to persuade Freakshow to tell them about the Reality Gauntlet. Freakshow shows surprise and concern over her capture, and manages to free her and escape together with the gauntlet. She uses her tattoos to attack Casper High's end-of-school Dumpty Humpty concert and manages to kidnap Sam and Tucker twice. She engulfs Jack, Maddie, Jazz, Sam's parents, and Tucker's parents with a wave of her tattoos and teleports them to Freakshow. She uses three of her bat tattoos to keep track of Danny, Sam, and Tucker as they search for the Reality Gems. Once they acquire the gems, she captures the trio the same way she captured their families. After Danny defeats Freakshow, Lydia tries to attack Danny, but Danny uses the Reality Gauntlet to transform her into various objects before she flees.

In "Phantom Planet," she can be seen in the crowd of ghosts that surround and attack Danny, and then again turning the planet intangible.

Lydia is a green-skinned ghost with red eyes, she is bald with five black prominent spikes, and her most notable characteristic is that her body is covered in tattoos. She wears purple lipstick, her nose and ears are pierced. She wears a metallic black cuff on each arm. Lydia's outfit consists of a long red cloak with a skull at the chest, a black cleavage-exposing corset and matching underwear, along with black boots.

Lydia is nearly silent; she never says a word. She often hides her body in a long red cloak, through which only her glowing eyes can be seen. She is very loyal to Freakshow and will do whatever he asks of her and do anything she can to help him.

Lydia is more than a mere slave to Freakshow; it's hinted that the two have or had a romantic relationship despite Freakshow being a human. It could be that she is the spirit of Freakshow's wife, girlfriend, or fiancée. As they escape from the Guys in White, Freakshow suggests getting dinner or a movie with her before settling on ruling all of reality.

She worked with Danny and the other ghosts, who were under Freakshow's command in "Control Freaks," though she was the only one who did so willingly. After he defeats her and Freakshow twice, Lydia probably does not like Danny. When he had the power of the Reality Gauntlet, Lydia seemed to fear Danny (possibly because Danny could and did change her to different forms).

Lydia can fly and turn intangible and invisible and she most likely possesses the other standard ghost powers. She uniquely can bring the tattoos that cover her body to life and control them, similar to DC Comic's Tattooed Man. In "Control Freaks" she only uses her tattoos to attack. In "Reality Trip" she also uses her tattoos to engulf herself and/or others and teleport them. However her powers revolve completely around her tattoos, and when off her body she is very vulnerable. 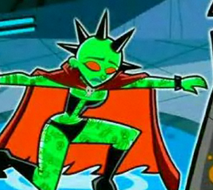 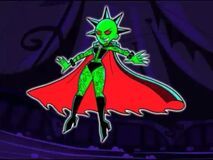 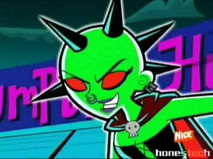 Add a photo to this gallery
Retrieved from "https://femalevillains.fandom.com/wiki/Lydia_(Danny_Phantom)?oldid=132248"
Community content is available under CC-BY-SA unless otherwise noted.