Lura, the queen of the Space Sirens.

She and her girls attacked in space bubbles at space travelers flying nearby and abducted their space ships, and they themselves were enslaved and kept in obedience with the help of a drug. They used special equipment that amplified the sound of their songs, making them look like Greek sirens. People fainted when they heard such a powerful sound. Captain Dave Kenton's friend, a reporter named Maeve, flew on one of the ships. she had time to send him a distress call. The captain flew to her aid and saw space girls in cosmic bubbles. He decided that they were being saved from disaster and invited them on board. So Lura with her sirens got on board and grabbed the captain. They arrived at Mimas, the satellite of Saturn. Where Lura showed him her weak-willed slaves, drugged by the Neptunian drug and a multitude of spacecraft captured by her. Then she led him to her throne room, in which the statues of frozen people stood. She was going to freeze the captain and put him next to a friend. But the captain was able to escape and restore body temperature with the help of electricity. Then he poisoned the water in their cosmic bubbles. When, for some time, they again attacked a space yacht passing by, the captain was able to arrest them because the poison had paralyzed the sirens. He called for reinforcements and a few months later the siren fortress surrendered

Lura appears in the story "Sirens of Space" in the comic Strange Worlds 5 of 1951. 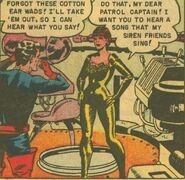 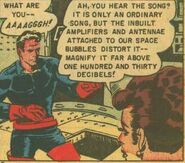 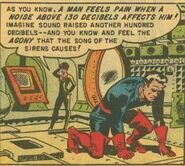 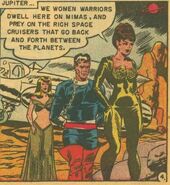 Add a photo to this gallery
Retrieved from "https://femalevillains.fandom.com/wiki/Lura_(Strange_Worlds)?oldid=156874"
Community content is available under CC-BY-SA unless otherwise noted.