Start a Wiki
watch 01:39
The Loop (TV)
Do you like this video?
Lucinda Hess (Danielle Donahue) was the main villainess of the 2008 film Aspiring Psychopath.

Lucinda's brief backstory revealed that her mother died when she was a child, having been mistakenly shot by the police. Even as a child, however, Lucinda had fantasies about killing people, going through with her morbid fantasies when she poisoned a girl in college.

In adulthood, Lucinda presumably continued her killing spree, with two of her past victims being a baby that she bludgeoned to death and threw out of a window and a Las Vegas hooker. In the case of the latter, Lucinda lured her to a hotel room under the claim of hiring her for a bachelor party before asking her to entertain her. But after having the woman strip and kissing her, she viciously insulted the woman and ordered her to take a shower, after which Lucinda bound and gagged the nude woman in the bathtub.

After angrily slut shaming the woman and proclaiming no one would miss her, Lucinda tortured her victim with an iron before electrocuting her to death by dropping the iron into the water. Lucinda would later use the same hotel room to kill a drug dealer she'd seen selling heroin to children, inviting him to the room to have sex in exchange for drugs before biting his penis off, killing him after leaving him to suffer until he begged for Lucinda to kill him. A year prior to the film's main events, Lucinda also went about stabbing her boyfriend to death with her switchblade, tearfully claiming in a video diary that he'd been trying to manipulate her and that the murder scared her because it was not premediated. Despite her alleged fear of her inability to control her murderous tendencies, Lucinda declared that she didn't want to stop her actions, as she believed that it "needed to be done". Lucinda's ultimate goal (as revealed during the film's main events) was to become a successful serial killer, and she began stalking serial killers she came across in an effort to learn from them.

The opening of the film showed Lucinda after she was captured by a serial rapist/murderer, as she was shown tied up and gagged with duct tape in the forest as her captor prepared to kill her. While the man was distracted, Lucinda tore herself free of her restraints before knocking the man out, tying him up with rope and gagging him with the tape. It was then that Lucinda rejected the man's pleas that he was only joking and revealed how she had been following him, blasting his crimes as sick while regarding his victims as "stupid" and at fault for what was done to them.

Lucinda also claimed that the rapist/murderer only taught her what not to do and that his sloppiness would've gotten him caught eventually before stabbing him repeatedly with a knife. But rather than outright kill him, Lucinda instead pulled out a bag of sugar and poured it onto the man, leaving him to be eaten alive by bugs and other creatures in the forest. After recording a video diary about her depraved quest and knowledge of psychopaths, Lucinda followed another serial killer with a video camera, following him into a building to record him as he tortured his latest victim with a hammer. After the killer noticed Lucinda, the villainess forced him at gunpoint to continue, having him hammer a wedge into his victim's teeth before suffocating him with a plastic bag. The man angrily blasted Lucinda for intefering with his kill, only for Lucinda to order the man with her weapon to let her learn from him how to kill, shooting his deceased victim in the head to show her gun was loaded before forcing him to leave the building with her.

As a snippet of Lucinda's video diary played, revealing the sadistic pleasure she got from the pain of others, Lucinda was later shown with the serial killer again, who was now disoriented and tied to a chair with barbed wire. Lucinda began to torture her captive victim with the barbed wire and a cigarette, all while giving deranged rantings that she was giving him the gift of "appreciating his humanity". After cutting off the fingers on one of the man's hands and cauterizing the stump, Lucinda sat down and asked the man if he had any kids, remorselessly describing how she she'd once murdered a baby, claiming she did so in an effort to "gain its' innocence" and that she enjoyed doing it because she was (in her mind) doing the baby a favor. Lucinda went on to detail her Las Vegas murder she committed after playing Russian Roulette with the killer and smashed his feet with a hammer, revealing that she was not jealous of the woman's beauty and looked down on her profession, as well as having a belief that the stripper looked down on her and that killing her would give Lucinda her beauty.

After detailing her murder of the heroin dealer and boasting that she gave him the chance to decide when he would die and gained the authority he had over his clients, the deranged Lucinda tortured her captive by squeezing his wounded hand, angered that he appeared to not listen to her unless she was hurting him. After taking a drill to both of her captive's knees, however, the villainess was surprised when he started laughing. When she demanded to know why, the man detailed how he became a serial killer and how he doubted Lucinda's motivation for killing.

Lucinda furiously blasted her victim and proclaimed that he didn't know anything about her and her motivation, and when the man continued to taunt her, Lucinda freed the man's uninjured hand and gave him her pistol, challenging him to kill her. After he failed to even cock the gun, however, the evil Lucinda seemingly stabbed him to death with her knife before going to the camera and claiming that her victim simply killed for fun and that she would gain his power through his death. Shortly afterwards, however, the man was revealed to have survived the stabbing by killing Lucinda with a bullet through the head, after which the man succumbed to his own wounds. The film's ending revealed that Dr. Dan Hess (a psychologist working with the police to investigate Lucinda's murder spree) was in fact Lucinda's father, who was revealed to be intent on studying Lucinda's video diaries to continue her twisted "legacy". 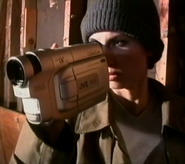 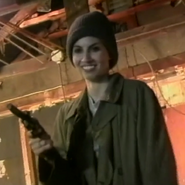 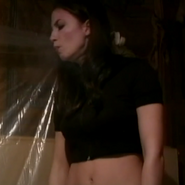 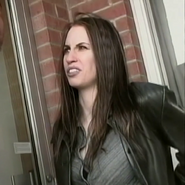 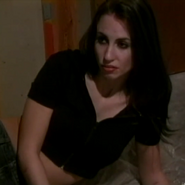 Add a photo to this gallery
Retrieved from "https://femalevillains.fandom.com/wiki/Lucinda_Hess_(Aspiring_Psychopath)?oldid=166983"
Community content is available under CC-BY-SA unless otherwise noted.