Lt. Melanie Hawkins (Gina Gershon) is a recurring main villainess from Seasons Four and Five of Brooklyn Nine-Nine. She is a police lieutenant and the leader of a task force, as well as the shared idol of Jake Peralta and Rosa Diaz. She is also the leader of the notorious Golden Gang robbers who robbed banks.

In her first appearance in the Season Four's penultimate episode, "The Slaughterhouse," Hawkins encountered Jake and Rosa while they were chasing Billy Ocampo, a low-level fence. She expressed her anger at the pair when they caught a couple of men who she later revealed were undercover cops, and it was stated that Hawkins had been looking to use Ocampo to get to the Golden Gang bank robbers (who stole $6 million in diamonds), believing he was their fence. After learning that Jake and Rosa were working to catch Ocampo, Hawkins invited them to her headquarters, known as The Slaughterhouse, and promised a place in her squad for one of them once Ocampo is captured. After Jake and Rosa competitively searched, the former finds Ocampo, and both of them turn him over to Hawkins, who decided to put them both on her squad after witnessing each one give credit to the other.

Hawkins turned heel in the final scenes of the episode, when she was revealed as a corrupt cop and the true ringleader of the Golden Gang. While going back into the headquarters looking for a bathroom, Jake witnessed Hawkins and Ocampo in a room together with the stolen diamonds, with Hawkins enlisting her partner to find out how much money they were worth, while telling him to avoid getting caught. All the while, Jake was left shocked regarding Hawkins' heel turn, as he realized that his idol is actually a greedy and corrupt villainess.

In the following episode, "The Bank Job," Jake and Rosa's attempts to catch Hawkins fell flat, and later on, Hawkins invited the pair for a night out at a bar, which was followed by Jake and Rosa being invited in their latest bank robbery the next day. Jake and Rosa called the rest of Nine-Nine for backup hoping to catch Hawkins and her cohorts, only for Holt and the group to end up at a different bank, while Jake and Rosa were held at gunpoint by Hawkins' group. At that moment, the evil Hawkins appeared and arrested Jake and Rosa, while also boastfully revealing that she knew about their plan to catch her.

In the season finale, "Crime and Punishment," Hawkins falsely testified that Jake and Rosa were part of the Golden Gang and had accounts in the Cayman Islands. With only a day left to clear their names, Jake went with Amy to visit Matthew Langdon, a former cop who disappeared after he was threatened by Hawkins, coming after he learned about Hawkins' villainous corruption. With Langdon finally deciding to go with Jake to testify against Hawkins, Jake boasted to Hawkins that it was over for her. However, after Boyle's hacker associates found where the accounts were connected to, it was revealed that Langdon was in league with Hawkins all this time, and he praised Hawkins in his testimony while falsely claiming that Jake bribed him to turn against her. In the final scenes of the season, Hawkins was shown blowing a kiss to Jake, displaying her arrogance over Jake and Rosa being convicted.

In "The Big House (Part 2)," Hawkins visited Rosa in prison, with Rosa pleading with Hawkins to put in a good word for her to the warden. This was part of 99's plan to acquire Hawkins' phone and trap her, and as Rosa promised, she delivered three consecutive minutes of pleading before giving up, with Hawkins turning her down. After learning from the phone that one of Hawkins' men would drop off the diamonds at locker in a New Jersey bus station, the group headed to there to intercept the drop, only to find a bag containing a phone. Holt answers the phone and hears Hawkins gloating that he and the rest of the 99 will never beat her.

In the episode's climax, Holt received a tip from mobster Seamus Murphy that Hawkins planned to use Langdon's pigs to smuggle the diamonds, and following this, the group headed to The Slaughterhouse to arrest Hawkins and her gang. Amy stated that Langdon had confessed to everything, and Hawkins ended up handcuffed by Holt.

Hawkins' villainous reveal in the end of "The Slaughterhouse" 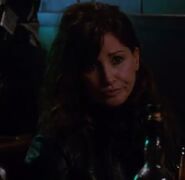 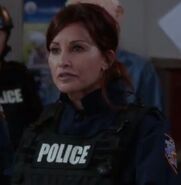 After Framing Jake and Rosa 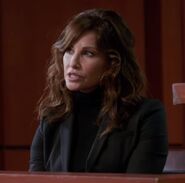 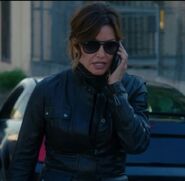 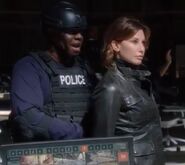 Hawkins arrested by Holt
Add a photo to this gallery

Retrieved from "https://femalevillains.fandom.com/wiki/Lt._Melanie_Hawkins_(Brooklyn_Nine-Nine)?oldid=204283"
Community content is available under CC-BY-SA unless otherwise noted.