Start a Wiki
watch 04:10
The Loop (TV)
Do you like this video?
Lt. Kirstin Blair (Kate Walsh) is the main villainess from "Navy Blues," episode 8.03 of Law & Order (airdate October 15, 1997). She is a Navy pilot who was revealed as the lover of Navy Chief Robert Stroud.

Stroud was found shot to death in a park, with detectives Lennie Briscoe and Rey Curtis finding the body. His ties to the Navy led to them to a base, where they interviewed Stroud's Quartermaster wife and later Blair--the latter of whom was asked by Curtis if she and Stroud ever had an affair. Blair replied that they didn't, stating that the Navy had rules against fraternizing, though Stroud's wife later revealed that Blair was lying, and that she and Stroud were engaged in an illicit relationship.

It was also uncovered that Blair was dating Jack Young, a civilian waiter, who revealed the detectives that Blair broke up with him due to having found "the man of her dreams," who was someone on her ship. When confronted by the detectives, Blair stated that she lied to Jack and that she wasn't seeing anyone else. In addition, Blair claimed that she was at the theater on the time of the murder, adding that she drove her own car to the destination. Curtis and Briscoe's inspection of the car revealed that the windshield was new, and after obtaining the shattered glass from her old windshield, it led to the conclusion that Blair was Stroud's killer.

After the revelation, Blair claimed that the shooting was an accident, adding that she and Stroud were discussing their relationship in the events leading to the murder. The villainess stated that she informed Stroud that she was breaking up with him, after which Stroud threatened her and attempted to blackmail in her into a sexual tryst, with the threat including holding Blair at gunpoint. A struggle ensued, and Blair fired two shots--the first shattering the windshield, the second killing Stroud. Following Blair's arrest and during her trial proceedings, Blair stuck to her story and painted herself as a victim who fought back against a blackmailer in Stroud. However, the episode's climax ended up revealing Blair's true demeanor--via a cassette recording.

The tape was given to Jack McCoy and Jamie Ross by William Ottenberg, Blair's trainer, who revealed that Blair was not a good pilot--having five downs (mistakes) during training. During McCoy's cross-examination, Blair repeated her claim and added that she had control of her emotions, but once McCoy played the tape, the audio revealed that Blair was panicking during a training session and even threatened to destroy Ottenberg for (in her mind) attempting to sabotage her. The recording also gave a revealing look at Blair's demeanor during the murder, uncovering that she killed Stroud intentionally after he attempted to end things and go back to his wife. The episode's end revealed that Blair pled guilty to first-degree manslaughter, but even after the plea, the evil Blair continued to claim that the Navy and the New York state government were all against her. 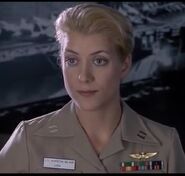 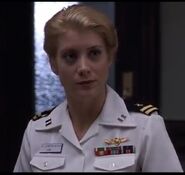 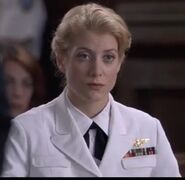 Add a photo to this gallery
Retrieved from "https://femalevillains.fandom.com/wiki/Lt._Kirstin_Blair_(Law_%26_Order)?oldid=167527"
Community content is available under CC-BY-SA unless otherwise noted.