Start a Wiki
watch 01:51
The Loop (TV)
Do you like this video?
Lou (Joyce Jameson) is a villainess from the 1966 episode "Herman Picks a Winner" for the TV comedy series, The Munsters.

After Herman Munster won twice betting at the horse races, a criminal bookie named Big Roy (Barton MacLane) calls up Lou to seduce Herman into a trap.  She pretends to be having car trouble, and Herman fixes it.  She is distraught that her daddy will be mad at her, so he agrees to drive her home and talk to him.

Once there, Daddy, who is really Big Roy, insists he stay for a drink.  Herman has Lou fix him four glasses of hot fudge sundays. Big Roy then tells Herman that he hears he is good at picking horse races.  After he agrees to pick him a winner in the upcoming race, Herman does "eenie meenie minnie moe" to select.

When Herman gets up to leave, Big Roy tells him he isn't allowed to leave, and at gunpoint from his two thugs, Vic and Lefty, they tied him up and gag him.  They tell him that if the horse named Royal Flush does not come in as the winner, he will be wearing a concrete overcoat.

When Royal Flush comes in second, the gang returns to knock him off, but Herman has crawled out on the ledge 50 stories high. They attempt to shoot him, but Grandpa (Al Lewis) shows up and gives him an anti-gravity pill that allows Herman to walk sideways down the side of the building to safety.

At the end, we see the Munsters reading about Herman being a hero for nabbing the gambling ring gang.  The whole gang including Lou was arrested and taken to jail.  Herman mentions, that he is sad that Lou was arrested, since she makes a good hot fudge sunday. 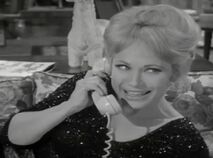 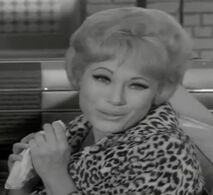 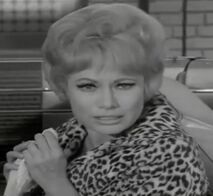 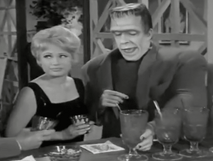 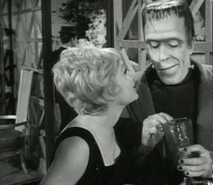 Add a photo to this gallery
​​​​​​
Retrieved from "https://femalevillains.fandom.com/wiki/Lou_(The_Munsters)?oldid=177923"
Community content is available under CC-BY-SA unless otherwise noted.