Lotta is a villainess from Jo-Jo Comics #19. She appears in the story Gladiators Of Gore.

She is the lover of the story's main villain The Jester. A man who organises sadistic fights to the death in his arena, and threatens those who refuse to compete with death by torture.

Lotta is first seen telling The Jester that she is bored and wants the excitement of watching one of his fights to the death. A fight is arranged but she finds it boring because of how one sided it, is as she enjoys the matches to be more of a contest, when the fight is over she asks for more.

The Jester is determined to get Jo-Jo The Congo King to fight in his arena and kidnaps Jo-Jo's mate Tanee. Jo-Jo himself is also captured in one of The Jester's traps and both are taken to the arena.

Later Lotta is seen watching more fights, Tanee is brought alongside her, as well as The Jester, to watch. Tanee calls Lotta cruel for enjoying the fighting. Lotta also catches on to the fact The Jester likes having Tanee around, and appears jealous.

Later that night The Jester is with Tanne and tells her he would like to keep her around as his favourite companion. Lotta appears at the door and overhears this and isn't happy. She threatens to kill Tanee, but The Jester strangles her to death for spying on him, and presumably because he would prefer Tanee. 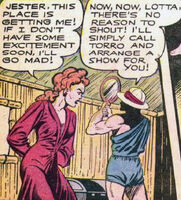 Lotta wants the excitement of watching a fight to the death 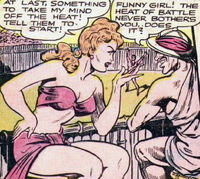 Lotta can't wait for the fight to start

Bored of the one sided fight, she wants to see another 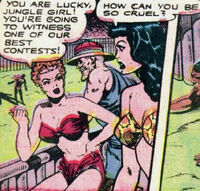 Tanee finds Lotta's enjoyment of the fights to be cruel

Jealous over the attention The Jester is showing Tanee 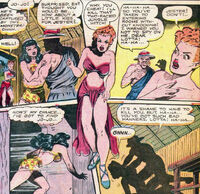 Killed by curiosity, The Jester strangles Lotta to death
Add a photo to this gallery
Retrieved from "https://femalevillains.fandom.com/wiki/Lotta_(Jo-Jo_Comics)?oldid=92286"
Community content is available under CC-BY-SA unless otherwise noted.