Lorna Doone (Christine McIntyre; 1911-1984) is the villainess from The Hot Scots, a Three Stooges short released on July 8, 1948, as well as the remake, Scotched in Scotland (release date November 4, 1954). She is the secretary to the Earl of Glenfeather, who hires the Stooges to guard his priceless antiques.

However, Lorna is revealed as one of the thieves, as she had been colluding with caretakers Angus and MacPherson in the thefts. Lorna's reveal came when she distracted Moe by dancing with him, only to hand the antiques to MacPherson, who was disguised as a figure in a painting. After the Stooges subdue Angus and MacPherson, the evil Lorna attempted to escape with the stolen treasures, only to be caught by the Earl and Scotland Yard--the latter placing Lorna under arrest.

In Scotched in Scotland, Lorna's villainous reveal comes earlier than in the original, as she is shown plotting with Angus and MacPherson. A scene in the remake shows Lorna cracking a safe and attempting to steal jewels, only to be caught in an orchestrated trap set by the Earl. Both films have the same ending. 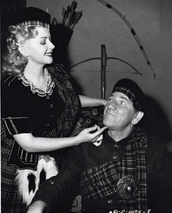 Add a photo to this gallery
Retrieved from "https://femalevillains.fandom.com/wiki/Lorna_Doone_(The_Three_Stooges)?oldid=114606"
Community content is available under CC-BY-SA unless otherwise noted.