Start a Wiki
watch 01:48
The Loop (TV)
Do you like this video?
Lorelei (Helga Line) is the monster in the 1973 horror film, "The Loreley's Grasp".  It was originally entitled "Las garras de Lorelei".  It is also known as "When the Screaming Stops".

The legendary Loreley has been living for centuries in a grotto beneath the river Rhein in Germany.  Every night when the moon is full, she turns into a reptile-like creature craving for human blood.  She needs to eat the hearts in order to prolong her own existence.  Lorelei is attended by a servant named Alberic (Luis Barboo), and also has three maidens dressed in leopard skin bakinis.  Two of these cavemwoman were credited as the popular Maria Luisa Tovar and Barbara Rey).

When one beautiful girl after another of a nearby boarding school is killed by her, a hunter named Sirgurd (Tony Kendall) is engaged to kill the monster.  Sirgurd also falls in love with the beautiful teacher Elke (Silvia Tortosa).

Sirgurd then hears about the legend, and meets a mysterious woman introducing herself as Lorelei.  For some reason he is not suspicious at all and falls for her trics.  She wears a dark green fringed bikini throughout the movie.

Sirgurd stabs the loreley in monster form with a handy semi-magic dagger, which was made from Siegfried's sword.  The monster turned into a pale Lorelei, who whispers, "we'll meet again in Valhalla" before dying.  Her ghost then rides on a horse to gallop into the afterlife.  When Sirgurd looks back he discovers that her body has turned into a skeleton. 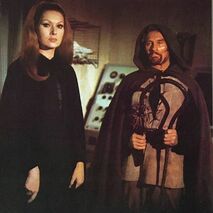 Add a photo to this gallery
Retrieved from "https://femalevillains.fandom.com/wiki/Lorelei_(The_Loreley%27s_Grasp)?oldid=187870"
Community content is available under CC-BY-SA unless otherwise noted.