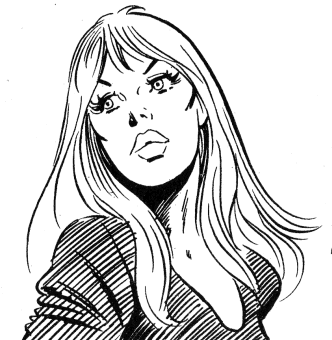 Lola works as an assistant for Dr. Felipe Ortega in Mexico City. Ortega believes that he can cure mental retardation in children by introducing them to sexual stimulation, and Lola has no scruples about helping him in this process. Lola attempts to trick two seventeen year olds - a boy named Ramon who was adopted by Felipe, and a girl named Manuela whom Ortega acquired temporary custody of after coercing her parents - into inappropriately touching each other under the guise of "innocent games". As both teenagers are only at the mental level of a twelve year old due to their condition, they agree to these games with minimal hesitation. As the days pass, Lola thinks up more games that involve sexual stimulation, and has no problems in being a participant herself; all while Felipe keeps a watchful eye through a one way mirror.

One day, Felipe witnesses a bizarre phenomenon in the room. A vase begins to float in the air as Ramon and Manuela perform mutual oral sex on each other, and the moment that Ortega interrupts them, the vase crashes to the ground. This leads the doctor to theorize that the mental state of the children combined with the simultaneous stimulation caused the telekinetic incident. Felipe's wife, Teresita Ortega, who previously had no interest in her husband's goal of curing mental retardation, now becomes greatly enthused with this new discovery. She suggests that Ramon and Manuela now have full on intercourse to trigger it again.

Lola once more has zero qualms with the suggestion, only this time she gets more aggressive; practically pushing Ramon deeper into Manuela from behind. Her exploitation quickly comes to an end, however, as she finds her own self now levitating above the floor. Lola is violently thrown around the room as the two teenagers continue copulating until she is at last killed when her skull is struck by the corner of a dresser.

...to Ramon and Manuela's drinks.

Anything the boss asks...

Unfortunately for her, the results are too good this time.

Add a photo to this gallery
Retrieved from "https://femalevillains.fandom.com/wiki/Lola_Martinez_(Storie_Blu)?oldid=165702"
Community content is available under CC-BY-SA unless otherwise noted.