After having sex with her landlord to pay her rent, she later watched him open his safe and boast about the car he will buy with the $68.000 inside. Liza paid close attention when he entered the combination to open the safe and later talked her boyfriend Chip into stealing the money later that night. He finally agreed on the condition that nobody would get hurt. Liza seemed to agree on that, though insisted to take some loaded guns with them, just to be safe.

She wanted to sell Violet to her brother Dwayne, who would have mutilated and killed Violet for pleasure. Liza drove to her brother's house and told him she had a girl she could sell him. Upon entering Dwayne's house we see the body of a previous girl he had killed, and inside he is watching a recording of himself killing the girl. Liza doesn't seem phased at all and even seems to enjoy watching the video. When Chip steps inside Dwayne's house he has immediate regrets and decides to save Violet from a similiar fate. Chip says he will go outside and get Violet out of the trunk, but Liza becomes suspicious and goes with him to make sure he does just that. Outside, Chip hits Liza over the head with a gun and drives off with her car, with Violet still inside.

In the final confrontation, Liza, accompanied by Dwayne, manages to find Chip and rescues him from the evil Monica and her sadistic friends Amy and Skinny, who had earlier killed Violet and taken the loot. They had also tortured Chip and were just about to kill him too but Liza saved him just in time.

Liza told Chip that she forgave him "like a dog, who runs off scared from the fireworks on 4th of July", but Chip was tired of being trained and treated like a dog and he broke up with her. This made Liza angry and she pulled out a gun and threatened to kill him, but Chip was quicker and drew first, killing Liza with a shot to the throat. 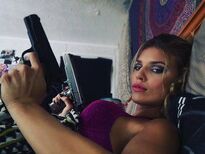 Add a photo to this gallery
Retrieved from "https://femalevillains.fandom.com/wiki/Liza_(68_Kill)?oldid=200875"
Community content is available under CC-BY-SA unless otherwise noted.