Start a Wiki
watch 01:39
The Loop (TV)
Do you like this video?
Lisa (Alexandria Hendrick) was the villainess of the 2013 film Bunni.

The film's opening revealed Lisa was married to a man named Justin, with whom she had a son named Chris. Lisa's marriage to Justin was a physically abusive one, as shown by her having a black eye as she showers. Later on, Lisa joined Justin on the couch and fearfully asked him if he was cheating on her, having seen his calls to stripper Bunni on the phone bill. Justin eventually admitted to his infidelity and blasted Lisa for her perceived failings as a lover, before beginning to beat Lisa.

Sometime later, Lisa invited Justin to join her for a sex game, donning a black leather leotard, fishnet stockings, high heels, and bunny ears for the act. After tying Justin to a chair, blindfolding him, and gagging him with duct tape, Lisa turned heel by drugging her husband with an injection before torturing Justin when he awoke, cutting his forehead with a shaving razor and cutting off one of his nipples. After revealing to Justin that she had also went about murdering Bunni for sleeping with her husband and forcing Justin to watch part of a videotape showing Lisa's father preparing to molest her, Lisa angrily screamed at her husband that she hated him before crushing his genitals, killing him. Afterwards, Lisa comforted a young Chris and stated that his father couldn't hurt them anymore, while also telling Chris that caring about people would only resort in getting hurt and that, to avoid being hurt, he would have to "hurt them first".

Later in life, Lisa became a deranged serial killer, using her advice to mold Chris into her willing accomplice. The film's events have Chris luring a group of his friends (including his girlfriend, Paige) to the abandoned store Lisa was using as a hideout, doing so to provide his psychotic mother with more victims. The first victim of the group was Rick, who Lisa killed by slashing his throat with a knife before castrating him and shoving his severed penis into his mouth. Lisa went on to kill Rick's girlfriend Ashley by stabbing her in the head and mouth, and later killed Nikki (Rick's ex-girlfriend) when she came to confront him on dumping her by stabbing and eviscerating her. As Chris and Paige came across Lisa's hideout, along with a CD containing a recording of the villainess murdering Justin, the evil Lisa killed Deputy Darrell when he arrived to investigate the scene and discovered Nikki's body, striking him in the head with a sledgehammer as he tried to radio for help before shooting him in the head with his own gun.

The film's climax has Chris and Paige seemingly evading Lisa's capture, with Paige discovering Chris' familial connection to their pursuer by seeing a text from her on his phone asking him to keep Paige still while she came to kill her. Lisa soon after arrived armed with a baseball bat, with Chris holding Paige still while his mother knocked her unconscious. Paige awoke tied to a chair and gagged with duct tape, with Chris rejecting Paige's pleas for mercy and stating that he had to kill her before she hurt him. As Chris kissed Paige, however, she was able to bite his lip off before freeing herself and smashing the chair over Chris's back. Lisa's attempt to stop her with her bat resulting in her striking Chris by mistake, causing him to become impaled on one of the broken parts of the chair. After briefly taking her mask off to comfort her seemingly dying son (which also revealed that part of Lisa's face was disfigured), the villainess armed herself with an axe to continue her pursuit of Paige.

Lisa ultimately cornered Paige and prepared to kill her, but paused when Paige revealed a secret: she was pregnant with Chris' baby. At that, Lisa lowered her weapon and went to examine Paige, allowing her to stab Lisa in the neck with a discarded shard of glass. As Paige tried to escape, Lisa pulled out her knife and stabbed Lisa in the back before collapsing from blood loss. After pulling the knife from her back, Paige attempted to leave after grabbing Lisa's axe. Suddenly, Lisa grabbed Paige by the ankle, driving Paige to finish the psychotic killer off by hacking her to death with the axe. 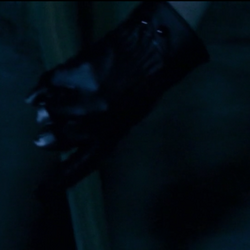 Lisa's gloved hand as she arms herself with a sledgehammer 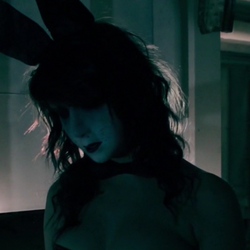 Lisa's disguise
Add a photo to this gallery
Retrieved from "https://femalevillains.fandom.com/wiki/Lisa_(Bunni)?oldid=160440"
Community content is available under CC-BY-SA unless otherwise noted.