The Female Villains Wiki
Register
Don't have an account?
Sign In
Advertisement
in: 1990s, Choker Necklace, Conspirator,
and 7 more

Linda Harper is a villainess from the 1993 computer game Eagle Eye Mysteries. She appeared in "Case of the Midnight Masquerade", which had Jake and Jennifer Eagle investigating a robbery that occurred during a masquerade party held at the Swanks hotel, where famous actress Amy Jolanna was nearly robbed of her valuable emerald pendant.

After it was revealed that the thief, Mr. Griffin, had an accomplice in the robbery attempt, Max Starr (who had captured Mr. Griffin when he tried to escape with the pendant) called the Eagles to investigate after forbidding any of the guests from leaving. When questioned, Linda appeared to show guilt in the theft attempt, as she was the president of the Historical Society and was behind the idea for the masquerade party. She also claimed that she heard rumors that Swanks Hotel was having financial troubles, and that an employee of the hotel was soon to be fired as a result.

However, Nicola Hamble's testimony revealed that she had been dancing with Sergio at the time of the theft, with Sergio being determined to be the only guest wearing an all-white outfit. Due to bellboy Chuck stating that he'd watched Nicola throughout the entire party and Sergio stating that his dance partner during the theft wore a mask, Linda was determined to be lying and was in fact the mastermind behind the theft attempt against Amy. Linda's backstory revealed that while she was once a wealthy woman, she ended up spending her fortune and resorted to criminal activity as a means of paying her bills. Having admired Amy's valuable pendant during the party, the evil Linda later went about snatching the pendant from her while everyone was dancing, handing it off to Mr. Griffin so he could make off with the jewelry. Now caught, Linda was arrested along with Mr. Griffin for her attempted theft. 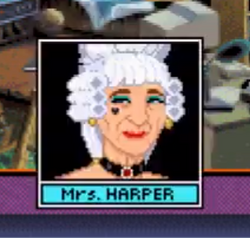 Linda Harper in costume
Community content is available under CC-BY-SA unless otherwise noted.