Linda Davis (Ion Overman) is the hidden main antagonist in the 2009 film Madea Goes To Jail.

Linda was a district attorney who was the fiancée of the film's protagonist Joshua Hardaway, we first see her, Hardaway and members of their wedding party along with other attorneys reviewing Madea's case and she and her maid of honor are disgusted by Madea's first mugshoot as a 9 year old girl but she was able to get Madea off by telling the judge that the officers failed to mirandize her, Josh later gives her the case of his childhood friend Candace "Candy" Washington to prosecute because of her being a friend of his.

Things start to get ugly when Josh takes Candy out to eat, Josh introduces Linda and her maid of honor to Candence. Candy could see right though Linda and says that "it'll never work" Linda is offended and fears that Josh is being unfaithful to her so she threatens to leave him and tells him he shouldn't communicate with people like Candace, only higher class people.

One day, Josh's best friend/best man Chuck catches Linda falsifying Candy's court documents and others to win previous cases she prosecuted but she blackmails him by threatening to tell their boss, the head district attorney that he cheated on his bar exam.

But feeling guilty that Candace, Madea and five other women were imprisoned because of Linda, Chuck (out of guilt and in spite of getting in trouble with the head ADA) told Josh anyway and Josh reveals the truth in front of their wedding guests including their boss, the mayor and the governor and leaves Linda at the altar. He later fights and succeeds for getting Linda indicted for falsifying Candace, Madea and 5 other women's cases which led to their release from prison and Linda's eventual arrest, trial and imprisonment at the end of the film. 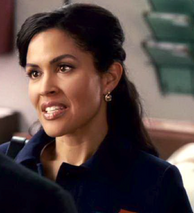 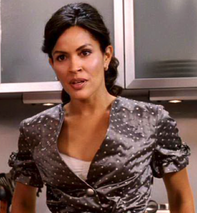 Add a photo to this gallery
Retrieved from "https://femalevillains.fandom.com/wiki/Linda_Davis_(Madea_Goes_To_Jail)?oldid=194290"
Community content is available under CC-BY-SA unless otherwise noted.