Lilly Poison is an antagonist in Men in Black III. She is Boris the Animal's alien girlfriend. Lilly is portrayed by American singer Nicole Scherzinger.

She appeared at the beginning of the film carrying a cake in Lunar Max Prison. After getting through the security checkpoints, they brought her to Boris' cell where they french kissed for a few seconds to the disgust of the guards. But then Boris' plan went into action as Lilly brings out the Weasel, an insect-like pet of Boris', who then quickly kill much of the guards. After reuniting with the Weasel, Boris was quickly able to escape and kill the guards with Lilly close behind, and she got him armed with a large blaster stolen from the armory.

They both reached a room full of guards, but Boris took the blaster and shot a hole in the roof with caused them all be sucked into space, but Lilly was caught in the suction and held on to Boris, who grabbed her with his one arm. But he began to let go and told her: "Sorry, darling. We did love the cake." and released, causing her to be sucked into the vaccum of space. 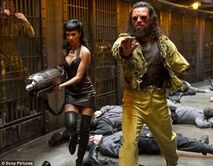 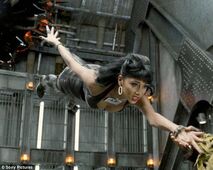 Add a photo to this gallery
Retrieved from "https://femalevillains.fandom.com/wiki/Lilly_Poison_(Men_in_Black_3)?oldid=136977"
Community content is available under CC-BY-SA unless otherwise noted.