Start a Wiki
watch 01:48
The Loop (TV)
Do you like this video?
Lilith (Angie Everhart) is the main villainess in the 1996 comedy horror film, "Bordello of Blood".

Lilith is the Mother of All Vampires, and is revived after Vincent Prather (Phil Fondacaro) places her heart back into her shriveled skeleton.  After coming back to life, she slaughters two members of Vincent's search party.  When she advances on Vincent, she is stopped by Vincent wielding the Key (the artifact featured in Demon Kinght), which gives him control over her.  Lilith is then directed to kill the last of Vincent's search party.

Later, Caleb Verdoux (Corey Feldman) and his friend go to a funeral home in search of a secret brothel.  The two are escorted to the brothel, where Caleb's friend meets Lilith, who kisses him and pushes her long tongue down his throat before using it to push his heart out of his chest.  Lilith then turns Caleb into a vampire.

Sometime later, Lilith locks eyes with Rafe Guttman, a private eye hired by Caleb's sister Catherine Verdoux (Erika Eleniak) to find her brother.  After one of her vamps, Tamara (Kiara Hunter), fails to turn Rafe, he escapes.  Lilith finds Rafe's dropped wallet and tastes Rafe's blood on Tamara's fingers, noting it to be special.  She teleports to Rafe's office, an abandoned adult movie theater, and returns his wallet, and then tries to seduce him.  Rafe, however, proves resistant to the vampire mother's charms, and holds her at gunpoint.  Unfortunately, Catherine enters and, seeing the two of them together, gets the wrong idea and storms out.

Lilith is working with Rev. Jiimmy Current (Chris Sarandon), a tele-evangalist, who had Vincent reanimate Lilith so she could rid the world of sinners by drawing them into her brothel.  Lilith is next seen talking with Vincent at a strip club, where Current finds them after seeing Vincent steel the Key from his office safe.  When Current grabs for the Key, Lilith threatens him.  The reverend and Vincent hurry out of the strip joint when they see Catherine enter with a camera crew to do a documentary about the dangers of sexual lust.  Lilith strays behind and is confronted by Catherine, who still remains unaware of her true nature.

Lilith grabs Current in the back alley, then slams him down on a car hood.  When Current demands that Vincent give him the Key, Lilith orders Vincent to leave the Key right where it is.  Vincent takes out the Key and, after some hesitation, he destroys it, leaving Lilith free to do what she wants.  She rejects Vincent's order to kill Current.

After Catherine is taken captive by Caleb and McCutcheon (Aubrey Morris), Lilith comes into the dungeon where Catherine is bound to an S&M contraptions and lasciviously rubs her hands all over Catherine's body.  Later, after Current comes into the dungeon and starts to free Catherine, she turns out to be Lilith in disquise.  When Current draws a knife and tries to stab her, Lilith grabs his wrist, which she then breaks before plunging the knife into Current's heart.  Rafe then comes in and attacks Lilith with an axe, severly wounding her.  When Rafe swings at her, Lilith disppears, laughing.

At Current World Ministries, where Rafe and Catherine are trying to broadcast a message, Lilith kills Jerry the camerman before appearing behind Rafe and informing him of Jerry's demise.  When Rafe attempts to punch her, she grabs his fist and handcuffs him to the railing.  She then teleports to the stage, where she begins attacking Catherine.  Rafe manages to activate the Laserlight of Lord prop and uses it to hit Lilith in the back.

The attack, however, proves ineffective and only serves to drive Lilith into a murderous rage.  She turns to Rafe and advances on him as he tries to calm her down.  As she angrily rants at him, her form degenerates into a gruesome, inhuman appearance.  Just as she's about to kill Rafe, she ends up getting stabbed right through the chest from behind by Catherine.  This separates her heart into four pieces (the only way she can be killed is if her heart is cut into four separate pieces).  Lilith dissolves into a mess of flames and flesh.

Though Lilith is defeated and the pieces of her heart is said by Rafe to be launced into space, it turns out that Lilith turned Catherine into a vampire, and the film ends with Catherine revealing her new nature to Rafe, whom she attacks in his car. 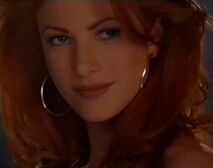 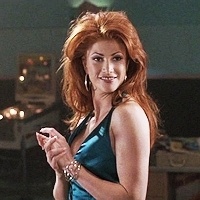 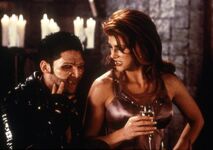 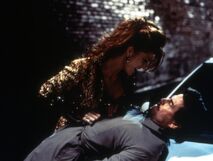 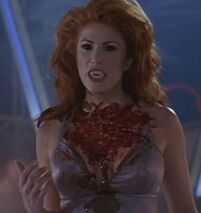 Add a photo to this gallery
Retrieved from "https://femalevillains.fandom.com/wiki/Lilith_(Bordello_of_Blood)?oldid=147134"
Community content is available under CC-BY-SA unless otherwise noted.