Start a Wiki
watch 01:51
The Loop (TV)
Do you like this video?
Lila (Candi Milo) is the villainess from "Mamba Wamba and the Voodoo Hoodoo," episode 1.09 of The Scooby Doo Show (airdate November 6, 1976). She was the lone female member of a rock group known as "The Alex Super Experience," and in the beginning of the episode, the group was performing their hit song, Mamba Wamba. After their performance, the titular Mamba Wamba appeared and abducted Lila. Lila is found by Shaggy and Scooby, only she had become a zombie and was shown with another zombie and Mamba Wamba, who forced the rest of the band to sign a parchment to never perform their song again.

It was revealed at episode's end that the group's manager, Roger, was Mamba Wamba, and Lila was an evil co-conspirator in his scheme. Knowing that Mamba Wamba would be a hit song, Roger and Lila attempted to cheat the rest of the band out of their money, using the Mamba Wamba legend to trick the group into signing away their rights to the song. In fact, the parchment was actually a legal release, as Velma removed the parchment covering to reveal the release. Lila was arrested for her villainous role.

Lila resurfaced in the 2014 film, Scooby-Doo! Frankencreepy, aligning with past Scooby Doo villains Cuthbert Crawls, C.L. Magnus, and Mama Mione to get their revenge on Mystery Inc. She disguised herself as a gypsy merchant, and used an inflatable dress to make Daphne believe she was unattractive. Lila and the rest ot the group were caught by the group, and she was again arrested. 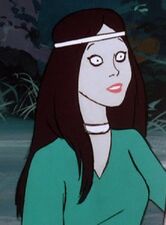 Lila in her "zombie" guise 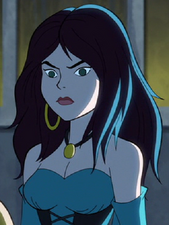 Lila in Frankencreepy
Add a photo to this gallery
Retrieved from "https://femalevillains.fandom.com/wiki/Lila_(The_Scooby_Doo_Show)?oldid=175185"
Community content is available under CC-BY-SA unless otherwise noted.