Start a Wiki
watch 01:24
The Loop (TV)
Do you like this video?
Liberty Keane (Kathleen Nolan) is the main antagonist in the 1966 episode ’Into The Widow’s Web’ (Season 1 ep 25) for the TV series ‘The Big Valley.’ She is the alluring ex-girlfriend of Heath Barkley.

Liberty works as a showgirl and previously she was a sharpshooter; she also works as a saloon girl (a western prostitute). She is seen first on stage in a knee-length skirt (shocking in those times) where Heath recognises her. Suddenly, a seemingly drunk man shoots at Liberty, and Heath tackles him. Then, it is revealed that he is a part of the show! The glamorous woman is seen at her boss’ side while he agrees to put on a show for the orphanage.

Later, Liberty (referred to as ’Libby’ in the letter) is in her dressing room wearing a kimono. She gets a message from Heath asking her to dinner.

The two dine and it is revealed that Liberty lived in the town of Strawberry, which Heath also grew up in. Heath tries to renew their relationship but Liberty reveals that she is married to the man who ‘fired’ at her.

Heath walks the stunning starlet home where they are confronted by her drunk, angry ex-husband, who threatens them with a gun. He takes Liberty inside and slaps her for adultery; the ever-gallant Heath rushes in to save his old flame. A shoot-out ensues and her husband dies, supposedly by Heath’s hands. However, it is later revealed that Liberth shot her husband. With the shots fired in the dark, Heath believes that he killed him, although Liberty sticks up for him, saying it was in self-defence.

Because her husband died, Heath brings Liberty to temporarily live with the Barkleys. Liberty is introduced to Audra Barkley (Linda Evans, pre-Dynasty) and Victoria Barkley (Barbara Stanwyck, portrayed Phyllis in Double Indemnity.) After the family has a meeting to discuss Heath about to be charged, he comforts Liberty, telling her it will be ok.

At Heath’s charging ceremony, Liberty called up as a chief witness. She swears on the bible to tell an ‘honest’ version of events, saying that Heath killed her husband in self-defence. However, she fails to convince the prejudiced sheriff, and Heath is charged with murder.

Later, Liberty goes to the sheriff ‘confessing’ to the murder. This is because of a convoluted scheme to make it seem impossible that she was the killer. She states truthfully that she is an expert marksman, but when she is pressured to show them her skills she purposely makes it as though she cannot shoot for her life.

When Jarrod Barkley checks the crime scene, her boss mentions that Liberty was formerly a sharpshooter; this makes Jarrod instantly suspicious of the lovely Liberty.

She and Heath are brought to the sheriffs office because Jarrod has a plan to measure the murder bullet with Heath’s bullet. This terrifies the red-headed murderess, who shows it clearly on her beautiful face. The bullets are measured and Jarrod’s suspicions are proven. The sultry showgirl tries to explain herself, saying she had to kill him to save Heath’s life but Jarrod tells her she didn’t have to murder. Without hesitation, Liberty steals Heath’s gun and holds them all at gunpoint, running to the carriage so she’s can escape.

Shots are fired and Liberty is badly wounded. Slowly Heath comes out of the building and walks over to the scheming femme fatale. She makes a pretence of shooting him, but loves him too much and drops the gun. Suddenly, due to her grave injury, she falls out the carriage; Heath holds her in his arms. Liberty reveals she shot her husband so she could marry Heath and she thought that no-one would charge Heath because the Barkley family are too important. The mortally wounded beauty delusionally sees her father in front of her and murmurs his words about him wanting her to be famous. Liberty dies in his arms and Heath is stricken with grief, crying over her corpse. 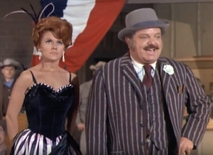 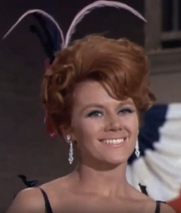 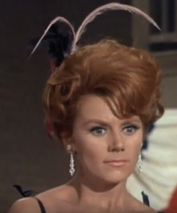 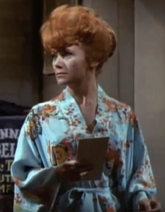 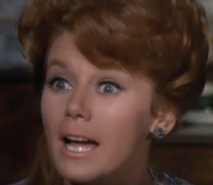 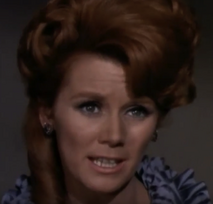 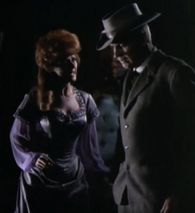 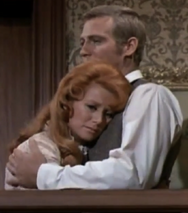 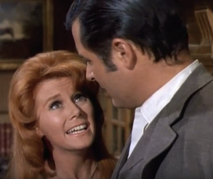 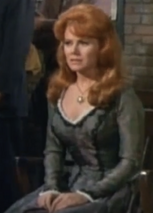 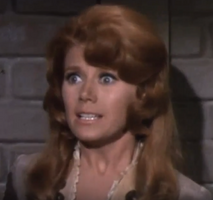 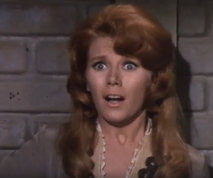 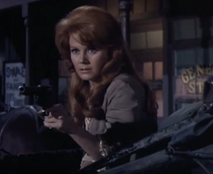 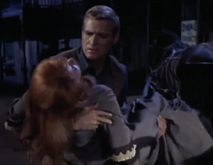 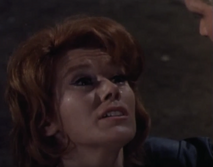 Add a photo to this gallery
Retrieved from "https://femalevillains.fandom.com/wiki/Liberty_Keane_(The_Big_Valley)?oldid=186883"
Community content is available under CC-BY-SA unless otherwise noted.