Start a Wiki
watch 01:24
The Loop (TV)
Do you like this video?
Lexie Fyfe is a professional wrestler best known for competing as a villainess in the SHIMMER Women Athletes promotion.

Lexie joined SHIMMER at their first show in 2005, where she defeated Christie Ricci. After Malia Hosaka was defeated by Loreiei Lee at their third show, Lexie joined Malia in attacking Lorelei before they were run out of the ring by Cindy Rogers. From that point on, Lexie and Malia formed a tag team known as "The Experience," and went on to defeat Cindy and Lorelei at Volume 4. The team would pick up consecutive wins at several shows, including a victory over Cindy Rogers and Allison Danger that came as a result of Cindy's heel turn towards Danger.

The Experience's winning streak ended at the hands of Cheerleader Melissa and MsChif at Volume 12 in 2007. Lexie continued to compete in singles competition as well, with her last one-on-one victory coming against Daffney at Volume 14. Lexie's last regular appearance for the promotion was in 2009, again paired up with Malia in two tag team contests; winning the first at Volume 24 and losing the second at Volume 26.

Lexie returned to SHIMMER at Volume 50 in March 2012 as part of the heel team of a 5-on-5 elimination match, which served as the main event. Lexie teamed with the Canadian NINJAs (Portia Perez and Nicole Matthews), Mercedes Martinez, and then-SHIMMER Champion Saraya Knight in a losing effort against the team of Cheerleader Melissa, Allison Danger, Leva Bates, MsChif, and LuFisto. Following her appearance, Lexie began serving as the VP of SHIMMER's sister promotion, Shine Wrestling, and made appearances on both promotions as a babyface character.

In April 2014, Lexie turned heel once again and appeared at Volume 65 as The Spider Lady, a masked villainess originally portrayed by The Fabulous Moolah in the "Original Screwjob" in November 1985. She was the revealed opponent for Thunderkitty, who was phoned by a manager claiming that a client wants to face her in the ring, looking to take 80% of Thunderkitty's pay. Later on, the evil Lexie made her entrance in a mask and an all-black outfit as The Spider Lady to face Thunderkitty. Following her entrance, Lexie unleashed her rule-breaking heel persona during the match, but she ended up defeated by Thunderkitty.

Lexie Fyfe at a SHIMMER event 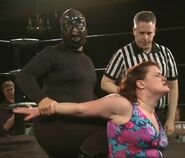 Lexie as The Spider Lady facing Thunderkitty
Add a photo to this gallery
Retrieved from "https://femalevillains.fandom.com/wiki/Lexie_Fyfe_(SHIMMER)?oldid=181088"
Community content is available under CC-BY-SA unless otherwise noted.