The Female Villains Wiki
Register
Don't have an account?
Sign In
in: 2010s, Brunette, Callous,
and 19 more

Not much was revealed regarding Lexi's backstory, only that she had an obsession with living the good life and becoming rich. Sometime before the events of the film, Lexi found Cameron Winters (the main protagonist) on social media, and learned about her being the recipient of a $3 million trust fund, which she would officially receive once she turns 25. With that, Lexi devised a scheme to get Cameron's inheritance--a scheme that included enlisting her lover, Brent Holvik to seduce Cameron and get her to fall in love with him.

That part of the scheme works out, and Cameron and Brent (who introduced himself as Brent Danner) became engaged, much to the concern of Cameron's mother, Nicole. It was early in the film that Lexi and Brent's relationship was revealed, as well as their scheme to gain Cameron's trust fund, when they were shown at Brent's home making out. Nicole's suspicions about Brent also ended up helping the plan, as Cameron responded negatively about her mother's feelings about Brent, which led to the couple actually eloping in response.

Meanwhile, as the film progressed, Lexi became jealous of Brent cozying up to Cameron, even after Brent's insistence that it was part of the plan. She would watch them together via webcams that she placed around the home, and after this, Brent gave Lexi a necklace in an attempt to appease her, which works. Lexi then devised their plan to kill Cameron, using her peanut allergy against her. The plan involved lacing one of the catered cupcakes with peanut oil and hiding her EpiPens, making it appear that the caterers were to blame. Due to Brent's sudden reluctance to the plan, Lexi crashed the wedding reception and introduced herself as his sister, Tara, doing so to keep Brent in line.

Brent goes through with the plan at the party; however, Lexi spotted Brent taking the laced cupcake for himself, prompting Lexi to make the switch. The plan works, and Cameron ended up hospitalized as a result. Lexi entered Cameron's room and attempted to kill her, only for Brent to stop her due to the room being an inconvenient place.

Nicole voiced her suspicions about Brent and "Tara" to her friend and co-worker, Grace, leading to a search for Tara Havlik online. A woman by that name was found at a hospital, and once Grace went there, she learned that Tara Havlik was a wheelchair-bound patient and a different woman from the one who posed as Tara at the party. Unbeknownst to Grace, the evil Lexi followed her to the hospital, and once Grace sent a message to Nicole about Tara, the villainess entered Grace's car and strangled her to death with a wire. Following the murder, Lexi ordered Brent to help her dump Grace's body.

Lexi also set up Brent and Cameron to have their honeymoon at a cozy house near a lake, where they could kill Cameron and her body wouldn't be found for days. However, by this point, Brent's feelings for Cameron had increased to the point where he could no longer go through with the plan. Once more, he began to see how increasingly psychotic Lexi was following Grace's murder. Brent surprised Lexi with an engagement ring and a proposal, stating that he wanted to spend the rest of his life with her, only to knock out Lexi and leave her for dead before heading to the planned destination with Cameron, thus confirming to Lexi that he loved Cameron and not Lexi.

In the film's climax, Lexi--furious and fueled by her desire for revenge--appeared at the lakehouse and attacked both Cameron and Brent with a fireplace poker. She later took Cameron out of the house and revealed that she wasn't Brent's sister, while also detailing her desire to become rich and revealing herself as the mastermind of the scheme to obtain Cameron's inheritance. The twisted villainess later pointed a gun at Cameron, and was set on killing her before Brent appeared and stopped her. Lexi later ordered Brent to choose between the two of them, but when Brent brought up Cameron, he ended up shot and fatally wounded by Lexi. At that moment, Nicole (after learning the truth about Brent from Tara) appeared at the house to save her daughter, leading to a confrontation that ended with Nicole striking Lexi with the fireplace poker, ultimately killing her and destroying her scheme forever. 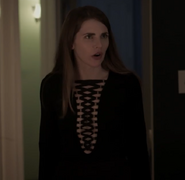 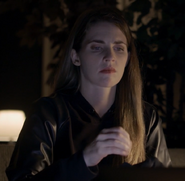 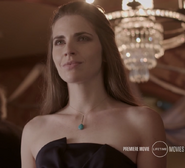 Lexi after being killed by Nicole Winters
Community content is available under CC-BY-SA unless otherwise noted.