Start a Wiki
watch 01:48
The Loop (TV)
Do you like this video?
Leslie Kent (Lynne Cormack) was the main villainess from "What a Mother Wouldn't Do," the penultimate episode of Friday the 13th: The Series' first season (airdate July 18, 1988).

The episode began with Leslie Kent's backstory: she and husband Martin were expecting their first child, but their physician, Dr. Green, warned her to terminate the pregnancy due to her health being in danger, as well as the baby's health following birth. Leslie remained insistent on carrying and giving birth to her child, and late one night, she walked into Vendredi Antiques (later called Curious Goods) and encountered Lewis Vendredi while noticing an antique Edwardian cradle. She left without purchasing the cradle due to her inability to afford it, but during Leslie's baby shower, her close friends surprised her with the gift of the cradle.

Months later, Leslie and Martin's baby, Allison, is born, and Leslie is later shown reading a copy of Rosemary's Baby while sitting at a park bench. Dr. Green is shown jogging past Leslie, who later shoves an empty baby cradle and sends it into the water. She screams for help saving her baby, with Dr. Green answering the call and coming to the rescue. However, Dr. Green noticed that the cradle was empty, and it was at that moment that he was knocked out and drowned by Martin. After Dr. Green's murder, Leslie established her heel persona by stating that Green was their fourth victim.

As revealed later on by Jack Marshak, the cradle that was gifted to Leslie carried a curse, as it was connected to the sinking of the Titanic. The story goes that a woman was attempting to save her baby when she and six others were on a lifeboat following the crash, but when she attempted to give the baby to the others, they wouldn't take him. Later on, the seven people ended up drowning, with the baby being the lone survivor. As a result, the curse on the cradle required the Kents to kill seven people in water in order to permanently heal their sick baby daughter. Martin expressed trepidations over their murderous actions, but Leslie continued displaying her insistence, stating that the murders have to be committed for Allison. The curse also involved Allison being in the cradle to commit the murders, with the cradle shaking once Allison's illness was getting to her, only to stop after each murder committed.

Later in the episode, the Kents found their fifth victim in the form of building super Mr. Johnson, as Martin lured him into their home under the pretense of fixing a leak, only for Leslie to knock him out. The couple dragged him towards the bathroom and drowned him in the toilet, after which, Martin moved his body into the pool. After Debbie, their nanny, found out about Mr. Johnson's death, Martin became worried after thinking that she spotted the super's keys, believing that she knew what they had done. Leslie stated that Debbie doesn't know, but later decided to sent Martin to kill her, after saying that Debbie truly cared for Allison. Martin's attempt was thwarted by Ryan and Micki (the latter having encountered Debbie about the cradle), who rescued Debbie and took her to the shop.

After getting a phone call from Debbie about the cradle, the evil Leslie left to meet Debbie, with plans to kill her. She praised Debbie for caring so much about Allison, only to knock her out with a crowbar and toss her into the water. Ryan appeared and attempted to rescue Debbie, only for Leslie to push him in as well; planning to make Ryan the seventh and final victim. The crazed villainess wielded a long pole and attempted to bash her victims, laughing maniacally while doing so. Once the duo sank underwater, Leslie celebrated under the belief that they had perished, because Allison would live and no longer be ill.

Leslie drove back home, where Martin had Jack and Micki at gunpoint. The pair arrived at the home after Jack realized that the couple was on borrowed time on their spree:  they had to commit the seven murders before 2:20AM on the exact anniversary of the Titanic sinking. After seeing that the cradle was still shaking with Allison crying, Leslie became enraged, as she believed to had done her part. She took Martin's gun and attempted to kill Jack and Micki, only for Martin to stop her and realize that they were too late. He later picked up Allison and wanted to hold her for the first time, only for the psychotic Leslie to shoot her husband to death and later order Jack and Micki to head to the balcony, planning to force them to jump to their deaths in the pool. After seeing Ryan enter alive, Leslie attempted to shoot him, but the gun was out of bullets. Realizing that she had to commit the ultimate sacrifice, Leslie ran to the balcony and jumped to her death in the pool. With Martin smashing the aquarium after being shot, and Leslie's suicide in the pool afterwards, they became the sixth and seventh respective victims, as the end of the episode revealed that Debbie also survived and had taken the cured Allison. 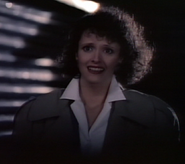 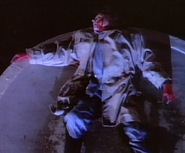 Leslie Kent following her suicide
Add a photo to this gallery
Retrieved from "https://femalevillains.fandom.com/wiki/Leslie_Kent_(Friday_the_13th:_The_Series)?oldid=124477"
Community content is available under CC-BY-SA unless otherwise noted.