Lena was introduced as the wife of Saul Greenberg, who is the owner of Saul's Shirt Shop. She became worried when Saul suspected that a group of Nazis were after them, and he ended up hospitalized and tended to by Dr. Bernard Kessler. Thomas Magnum was on the case, and after taking Lena to Robin's Nest, she revealed to Magnum that she and her husband were Holocaust survivors and that Saul was a member of a Jewish hit squad. When Lena was left with Jonathan Higgins, the group appeared and fired a knockout dart at Higgins, while Lena disappeared.

Magnum was led to believe that Kessler was in league with the Nazis, even after he was found dead in his office by Magnum and Rick. Their original conclusion was that Kessler was a Nazi posing as a Jewish person, but an old photo of the Greenbergs revealed everything:  as Lena didn't have a branded tattoo on her wrist. This led to the correct conclusion:  Kessler really was Jewish and the Greenbergs were the true Nazis who posed as Jews for decades after WWII. The people who were after them were members of the Jewish hit squad, who Kessler sent after them. One member had Saul held captive on Kessler's boat, but at that moment, Lena appeared and stabbed the squad member to death.

In the process, Lena turned villainous and revealed herself as a Nazi, and as revealed by Magnum when he held Lena at gunpoint, she was the one who killed Kessler, using the melee at Robin's Nest to sneak away and commit the murder. The motive was that Kessler recognized Saul as the Nazi responsible for gassing Kessler's parents, and as she kneeled near her now-deceased husband, the evil Lena defended her actions by saying that it was wartime and that Magnum couldn't understand, all while clutching the blood-covered scalpel and also voicing her displeasure over pretending to be Jewish. Magnum stated to Lena that it was over, with the villainess agreeing before stabbing herself to death with the scalpel. 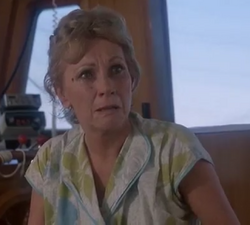 Add a photo to this gallery
Retrieved from "https://femalevillains.fandom.com/wiki/Lena_Greenberg_(Magnum_P.I.)?oldid=137252"
Community content is available under CC-BY-SA unless otherwise noted.