Start a Wiki
watch 01:48
The Loop (TV)
Do you like this video?
Lee Anne Marcus (Georgina Haig) is a recurring protagonist and hidden villainess of CBS' Reckless. She was a former member of the Charleston PD and the wife of Arliss Fulton, a soldier who had been left paralyzed after fighting in Iraq. Prior to the series' events, Lee Anne started an affair with fellow officer Terry McCandless, losing her job after suggestive photos she sent Terry were sent to other officers on department email.

Lee Anne hired lawyer Jamie Sawyer to represent her in a lawsuit against the Charleston PD for defamation and wrongful termination, and it was after Lee Anne hired her that a video was uncovered of Lee Anne having sex with several other officers; an event Lee Anne claimed to have no memory of. But as the case progressed, Lee Anne was continuously contacted by Terry, with the pair eventually having a tryst in Jamie's office during episode 1.07, "Deep Waters". This later harmed Lee Anne's case, however, when it was revealed that Terry had a camera planted in the office, with the footage of the tryst being presented during the trial by city attorney Roy Rayder.

But as revealed in the series' penultimate episode, "Civil Wars: Part 1", Lee Anne's act as a victimized woman was a mask for her true nature as a manipulating and opportunistic villainess. Jamie learned of Lee Anne's true nature when she went to talk with Ronnie Porter, a former Charleston PD officer who left the force following a mental breakdown. When talking with Ronnie at the mental hospital he was committed to, Ronnie revealed that Lee Anne seduced him into a relationship and convinced her to steal Ecstacy (among other things) from the police evidence room. He also revealed that Lee Anne ended things when he refused to steal for her anymore, thus beginning her illicit affair with Terry. The end of the episode showed Lee Anne meeting with Dec Fortnum at a church, indicating that Lee Anne and Fortnum were lovers and conspiring together.

In the series finale, "Civil Wars: Part 2", Jamie confronted Lee Anne for lying to her, with Lee Anne openly admitting to seducing Ronnie to steal for her, establishing Lee Anne's heel persona. The evil Lee Anne also boasted that Jamie couldn't report her due to client confidentiality and threatened to destroy Jamie's career if she tried to drop her case, though she claimed that everything she'd done had been for Arliss (who had seemingly committed suicide earlier in the series) and that despite her lies, the Charleston PD was far from innocent. Later on, as Lee Anne's trial progressed, she met with Fortnum again at an aquarium, revealing how their illicit affair began and how she had accused the Charleston PD of wrongful termination to make Deputy Chief Holland Knox look bad to boost Fortnum's mayoral candidacy.

During the meeting, however, Lee Anne accused Fortnum of being behind the sex tape being leaked to the media, reminding him that the tape's leak humiliated her and presumably drove Arliss to suicide and telling him she would make him pay if she learned he was responsible for it. After Roy learned about Lee Ann's relationship with Ronnie and convinced him to testify against her, Lee Anne texted her displeasure of Ronnie's decision to him before subtly seducing him when he took the stand, goading him into recanting his claims against Lee Ann. After court, Lee Anne was confronted by Terry about Ronnie lying for her in court, with Lee Anne claiming Ronnie lied to him and convincing Terry that she loved him and that they were close to finally being together, effectively seducing Terry into a tryst.

However, in a shocking twist, Terry testified against Lee Anne and confessed to their affair and her using him to steal drugs from the department, even suggesting that he believed she was responsible for Arliss's disappearance and revealing their pre-trial tryst. Afterwards, Lee Anne was asked to meet with Jamie at her office, only to be confronted by Arliss, who had faked his death in an attempt to leave Lee Anne to hurt her for betraying him and been found by detective Preston Cruz. After expressing heartbreak over Arliss's faked death, Arliss offered to run away with Lee Anne if she agreed to settle the lawsuit. After expressing reservations, Lee Anne told Arliss she needed time to think about his offer, though it was later revealed that Lee Anne refused to end the suit.

As the jury was deliberating, Lee Anne confronted Terry (who was now back with the Charleston PD) and accused him of selling her out, only for Terry to blast Lee Anne as a hypocrite and say he was done with her, only for the villainess to taunt Terry by saying that they would never be over. Ultimately, the verdict was revealed, with the jury ruling in favor of the city of Charleston on the defamation charge and in favor of Lee Anne on the wrongful termination charge, with Lee Anne being rewarded $54,000 in compensatory damages and 6.7 million in punitive damages. The episode ended, however, with Dec being found shot with Lee Anne tearfully standing by, though the series ended without revealing whether or not Lee Anne was responsible for the shooting. 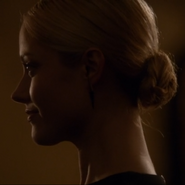 Lee Anne during her villainous reveal

Lee Anne as she was confronted by Jamie
Add a photo to this gallery
Retrieved from "https://femalevillains.fandom.com/wiki/Lee_Anne_Marcus_(Reckless)?oldid=170316"
Community content is available under CC-BY-SA unless otherwise noted.