Start a Wiki
watch 01:51
The Loop (TV)
Do you like this video?
Leda Callisto (Erin Karpluk) is a villainess from the 2003 video game CSI: Crime Scene Investigation (based off the TV series of the same name).

She first appeared in the game's 4th case, "More Fun Than a Barrel of Corpses". She was a pharmacist who was questioned in regards to the murder of Sophia Benedetti, the daughter of casino owner Carlo Benedetti.

Leda was questioned by Warrick Brown and the player when it was discovered that her pharmacy carried Maxamine, an experimental cancer drug that had been used to poison Sophia to death. Leda revealed that Dr. Edward Wilkinson had recently ordered a prescription of Maxamine, leading the CSI team to believe Wilkinson had killed Sophia once evidence found in Wilkinson's truck matched evidence and learned that Sophia had been having an affair with Wilkinson.

But as revealed later on, Leda had also had an affair with Wilkinson and had been responsible for killing Sophia, having given Sophia a pack of tissues laced with Maxamine to kill her. Sophia later used one of the tainted tissues while at a garden and succumbed to the poison, and after she died, Leda loaded the body into the back of Wilkinson's truck and drove to the Monaco Casino, where she stored her body in a barrel at the casino's loading dock after placing a pair of poker chips in Sophia's mouth. Throughout her interrogations, Leda expressed a cavalier and sarcastic demeanor. Despite this, Leda freely volunteered a DNA sample, with her hair matching a hair she left behind on the poisoned tissues, revealing her as Sophia's killer.

Leda was arrested for Sophia's murder, but reappeared in the game's final case, "Leda's Swan Song", as the team investigated the mysterious disappearance of CSI Gil Grissom. Within prison, Leda had been toying with the authorities by making cryptic remarks regarding Grissom, with her having destroyed her fingerprints with an acid-based compound further impeding the investigation. When questioned by Catherine Willows and the player in her cell, the evil Leda continued to avoid answering to what she'd done to Grissom and why she'd murdered Sophia, sarcastically stating she respected the CSI squad too much to do so and boasting of how she enjoyed thinking about how desperate the team was to locate Grissom.

Ultimately, the CSI team was able to uncover Leda's maden name to be Leda Murphy, as well as evidence linking Leda to the murder case of Karen "Kylie" Yardstrum; the first case of the game and a murder that was initially believed to be committed by Devon Rodgers. A homemade medicinal cream found in Leda's apartment was found on the bedsheet used to strangle Kylie, which ultimately proved that Leda had murdered Kylie, entering her hotel room through the fire escape after she was done having sex with a man she'd brought to her room before strangling her with her makeshift weapon, tying up her corpse afterwards and placing money in her mouth in accordance to ancient Greek mythology of placing money in the mouth of the dead to pay the ferryman taking the body to be buried. The evidence also showed that Leda had also abducted Grissom, luring him to the gardens before drugging him with chloroform and driving away in Wilkinson's truck with Grissom in the back.

Despite Leda's continued refusal to cooperate, the CSI team was able to piece together Leda's motivation for her crimes: her father, Bernard Murphy, was a former CSI who was dismissed a few years prior for breaking evidentiary collection procedures in a drug raid case involving Sophia Benedetti, with Grissom speaking as a procedural expert at Bernard's disciplinary hearing. When it was revealed that Bernard had committed suicide a week prior, Catherine confronted Leda who indirectly confessed to killing Kylie and Sophia and abducting Grissom, doing so in revenge for her father's death. She went on to blast the CSI unit for being (in her mind) incompetent and claimed her father was set up as a scapegoat when Carlo paid off the CSI unit to help his daughter walk, while also accusing Grissom of doing nothing to help Bernard and of not caring about people. As for Kylie's murder, Leda revealed that her father's depression drove him to sleep with her, referring to her as a "showgirl slut" and remarking how she felt her actions had put justice in order.

Later on, it was uncovered that Grissom had made a report speaking to the evidence against Sophia being tampered with in an effort to prove Bernard's innocence, with it having been buried as a result of Carlo's influence. But even after being told this, Leda accused the CSIs of trying to manipulate her and continued to boast of how her father was a brilliant CSI, stating that if he were working the case, Grissom would be found. The player and Catherine eventually found Grissom tied up in a storage unit, tied up and surrounded by the same flesh eating bugs Leda used to distract Grissom as she drugged him. The two freed and rescued Grissom, and Leda was arrested (off-screen) for abducting him and for killing Kylie Yardstrum and Sophia Benedetti. 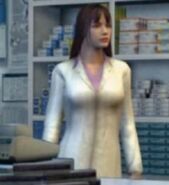 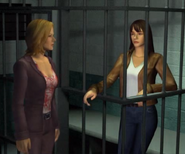 Leda being interrogated in prison

Leda preparing to murder Kylie Yardstrum
Add a photo to this gallery
Retrieved from "https://femalevillains.fandom.com/wiki/Leda_Callisto_(CSI:_Crime_Scene_Investigation)?oldid=119665"
Community content is available under CC-BY-SA unless otherwise noted.