Start a Wiki
watch 01:51
The Loop (TV)
Do you like this video?
Learda is the villainess in the 1948 episode "The Leopards of Learda" for Jo-Jo Comics.

Jo-Jo The Congo King was asked to visit the Kingdom of Calon at the request of Princess Learda. Jo-Jo's mate Tanee was attacked by a native. When Jo-Jo saw the attack, he came to the aid, and found a hundred leopards mauling Tanee. When he went to her aid, they also pinned him down, and began speaking that Learda will be pleased.

Suddenly, a massive leopard arrived of which the rest of the leopards bowed down to. Suddenly, the leopard transformed into a beautiful blonde girl with a leopard crown on her head.

Learda used Tanee as a hostage in order for Jo-Jo to obey her.  When he attempted to fight back, Learda blinded his eyes. She then promised her chief warrior leopard named Bucha, Tanee's brain instead of the simple brain she gave him. It was discovered that Learda takes and replaces human brains into leopard skulls and leopard brains into human heads.

At the temple, the leopard with Tanee's brain set out to find Jo-Jo. She located him inside a wooden cage suspended in the air from a tree branch. The Tanee leopard helped Jo-Jo escape and then led him back to the Temple.

After reaching the Temple, Jo-Jo grabbed Learda, and demanded that she change Tanee back. After changing all of the natives back including Tanee, Learda attempted to flee. However, she was caught by the horde and mauled to death. Tanee was unable to watch the horrible way she was destroyed. Jo-Jo reminded her that "Those who create monsters are always killed by them". 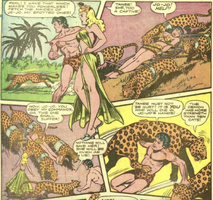 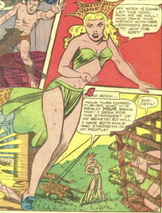 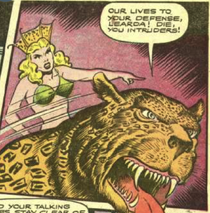 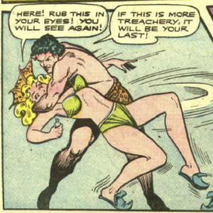 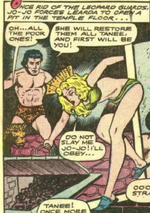 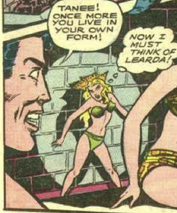 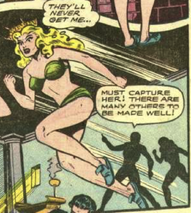 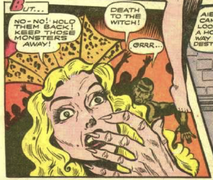 Add a photo to this gallery
Retrieved from "https://femalevillains.fandom.com/wiki/Learda_(Jo-Jo_Comics)?oldid=183599"
Community content is available under CC-BY-SA unless otherwise noted.