Start a Wiki
watch 04:10
The Loop (TV)
Do you like this video?
Layla is a retired wrestler and manager best known for competing in WWE, where she portrayed a villainess.

Layla debuted in WWE as part of the Diva Search in 2006; eventually going on to win the competition. A year after winning the Diva Search, Layla turned villainous and feuded with former Extreme Exposé partner Kelly Kelly for several months between 2007 and 2008 on the ECW brand; a feud that would actually include villainous Divas Lena Yada and Victoria. She was moved to Raw in 2008, where she later became the heel manager for William Regal, while Jamie Noble was vying for her affections. Layla cruelly broke Jamie's heart, stating that she couldn't wait to get rid of him and she found a worthy man in Regal.

Layla managed Regal until she was moved to SmackDown in 2009, where she engaged in a brief feud with Eve Torres. Later in the year, Layla aligned with Michelle McCool to form the LayCool tag team, which remains Layla's most known villainous role. During that time, the pair would torment and bully Mickie James, and later feuded with Beth Phoenix, while Layla would go on to capture the WWE Women's Championship in May 2010. Layla and Michelle also feuded with Melina and bullied Natalya throughout the rest of 2010 and the early months of 2011, Layla was on the losing end of a six-person tag team match at WrestleMania 27, and weeks later, she and Michelle split up.

After Kaitlyn captured the Divas Championship (the same title that Layla held as a babyface for four months in 2012) in January 2013, Layla began turning heel and displaying jealousy over Kaitlyn's success, doing so by attempting to upstage and sabotage Kaitlyn so she could receive an opportunity at the Divas Championship. On March 8, Layla manipulated Kaitlyn into having her at ringside during Kaitlyn's match against Tamina Snuka, only to interfere and cause Kaitlyn to lose to Tamina. Layla appeared as a villainess in an exclusive interview on April 7, as she considered turning against Kaitlyn and wanted her championship back; claiming that she hasn't been elevated for being the nice girl.

Layla kept her villainous persona hidden and re-aligned with Kaitlyn in June (after Kaitlyn lost the title). However, on August 2, the evil Layla betrayed Kaitlyn during her Divas Championship match against champion AJ Lee, doing so by preventing Kaitlyn from attacking AJ at ringside. Layla showed little to no remorse for her betrayal; flashing a sinister smile as she watched AJ defeat Kaitlyn. After the match ended, Layla skipped away with AJ while laughing evilly at Kaitlyn, cementing Layla as a villainess.

After turning villainous, Layla stated that she betrayed Kaitlyn to get attention, and later defeated Kaitlyn in a grudge match with AJ's help on August 5. Layla also served as a heel manager for AJ; being in AJ's corner as she defeated Naomi in non-title action on Main Event.

In 2014, Layla replaced Summer Rae as Fandango's dance partner/manager, which prompted a feud between Layla and Summer. Layla defeated Summer Rae at the Money In The Bank PPV, but during a rematch between the two, they attacked Fandango and formed a team known as The Slayers. The Slayers mainly feuded with Natalya for the remainder of 2014. After sporadic appearances on Main Event, Layla retired from wrestling on July 29, 2015.

The evil Layla making her entrance on ECW 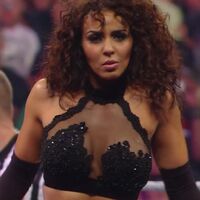 Layla in the ring against Eve Torres 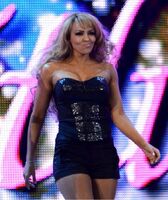 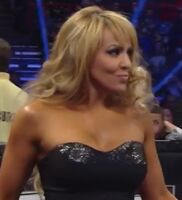 Layla as a heel manager at ringside 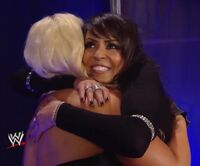 Layla showing no remorse for her evil actions 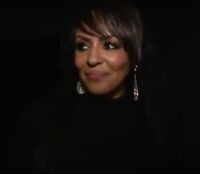 The evil Layla on Backstage Fallout after her heel turn 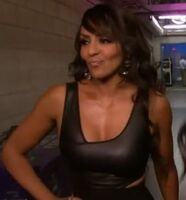 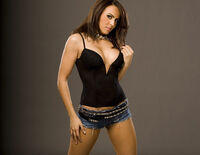 The evil Layla with a seductive style 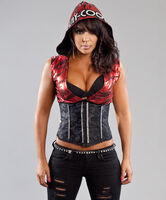 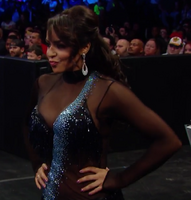 The evil Layla as Fandango's manager 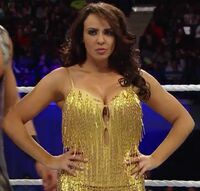 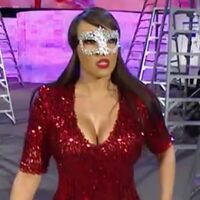 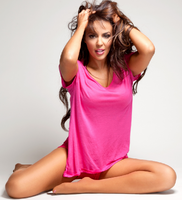 Beautiful outside but even darker on the inside

Retrieved from "https://femalevillains.fandom.com/wiki/Layla_(WWE)?oldid=209326"
Community content is available under CC-BY-SA unless otherwise noted.