Start a Wiki
watch 01:51
The Loop (TV)
Do you like this video?
Laverna (voiced by Kathleen Barr) is the main evil babe from the Barbie: Fairytopia trilogy.

Laverna swore to her sister, the Enchantress, that she wanted to make peace. The Enchantress believed her and invited her to drink buttercup-milk with her. But what she didn't know was that Laverna slipped some of her poisonous formula in her drink.

The Enchantress drank the poison unknowingly and immediately fainted. She became very weak and unable to stop her sister's plan. Laverna started to kidnap the guardians of Fairytopia to suck the magical power from their necklaces and transform those powers to herself.

The first guardian to be kidnapped was Topaz, the yellow guardian. Laverna offered her buttercup-milk and ambrosia, which Topaz refused to take at first, but then changed her mind. Laverna told her that she'd kidnap the other guardians soon so Topaz will not be lonely for a long time. The guardians would all be together to see how Laverna takes over Fairytopia.

The fairies who breath the poison will become so weak that they lose the power to fly. And the only one who can help them will not be their beloved Enchantress. It will be Laverna. And all of Fairytopia will love her for it. Laverna suggested that since she will soon be the Queen, she and Topaz should get along.

The second guardian to be kidnapped was Ruby, the red guardian. He categorically refused to eat anything Laverna served him, even though Topaz said that everything was delicious. Ruby was certain that the Enchantress would stop Laverna from doing anything evil. That's when Laverna told the two guardians what she had done to the Queen to keep her out of the way.

Using her spell, she showed them the faint and motionless Queen. Ruby and Topaz wanted to rush to the Queen but Laverna's other spell kept them from leaving their seats. Laverna told Ruby one more time to take advantage of her hospitality because he would be living under her rule forever.

When Laverna had kidnapped Amethyst, the purple guardian, and the green guardian, she wanted to tell them her plan to take over Fairytopia. But when Ruby protested, she had to stop talking and silence him. Just then, two Fungus came in with Azura, the blue guardian. Laverna welcomed her friendly but Azura wasn't going to fall for her pretended kindness.

As Laverna had five guardians to listen to her, she now told everyone how she will suck the power from the guardians' necklaces and transform those powers to herself. Then, Laverna noticed that Azura wasn't wearing her necklace. Azura lied that she rarely wears it because blue clashes with her eyes. Laverna understood that she was not telling the truth and one of the Fungus remembered that he saw the necklace on a sleeping little wingless fairy.

Azura admitted that she gave the necklace to the fairy to keep it safe. Laverna realized that a wingless fairy will not be affected by her formula and that she could ruin everything Laverna had planned. She quickly ordered all of her minions to look for the fairy and not return without her.

Laverna was able to kidnap all the seven guardians. Azura didn't think Laverna could to get the power out of the gems in their necklaces. Then, Laverna showed her a crystal and placed it in a hollow in her thrown. Azura made fun of her because nothing happened. Laverna assured her that it soon will. Suddenly, the six necklaces on the guardians began to gleam. It was a sign that the seventh necklace was near and so was the wingless fairy.

Four Fungus brought Elina's friends, Dahlia, Bibble and Hue Hue, to Laverna. Laverna showed a bit happiness to see her old friend, Dahlia, again. But she was even happier to find out that they were friends of the wingless fairy, Elina.

Elina entered a big hall and saw the seven guardians and her friends. She rushed to Dahlia to untie her arms but Laverna told her that the ropes around their hands are enchanted and that they are impossible to untie. Elina commanded Laverna to let her friends go but Laverna only agreed to do it if Elina gives her Azura's necklace. Elina refused and Laverna saw the rainbow in her eye. The sign that she was destined for great things.

Laverna tried another way to convince Elina to give her the necklace. She told Elina how alike they were. That they both had been laughed at and teased because of their differences. And that she was the one who could change it. Who could give Elina wings and be her friend who would never point out her differences.

Elina was so amazed of the thought that she will have wings, that she agreed to hang the necklace around Azura's neck. As Elina walked towards Azura, Laverna pointed her spell at the crystal in her thrown. The crystal began to gleam as the six guardians' necklaces. One by one, the crystal pulled the power out of the necklaces.

Elina stopped in front of Azura who begged her to wake up from her dream and do what is right for everyone. But Elina didn't hear her. She hanged the necklace around Azura's neck and the last power rushed through the air to Laverna's thrown. Laverna felt the powerful magic flow into her.

Azura tried her last hope and whispered to Elina: "For the friends you haven't met." That sentence woke Elina up from her "wingdream" and she realized that she had to fight against Laverna. She pulled the necklace off Azura's neck and turned around. She remembered what Dahlia had said about the union point. That it was the only weakness of Laverna's plan.

Elina realized that the crystal was the union point and threw Azuras necklace at it. The crystal broke and the guardians' magic started twirling around in the room. The magic surrounded Laverna and raised her off the ground. Laverna disappeared and was banished to the Bogs of the Hinterlands.

Laverna wanted to eat the Immunity Berry to be invulnerable to all magic, regardless of time. She made her fungi kidnap Prince_Nalu Nalu and force him to lead him to lead them to the berry. Thanks to Elina and Nori, Nalu was rescued and Laverna was transformed into a toad by a True Self Berry which Nori and Elina somehow painted a red stripe onto to make it look just like the Immunity Berry.

Laverna wanted to stop the flight of spring and plunge the Crystal Palace into a decade (10 years) of bitter winter as a threat to her sister not advocating the Fairytopia throne to her. She is defeated by distengration in a poof of smoke destroying her for good. 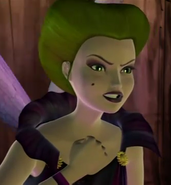 Add a photo to this gallery
Retrieved from "https://femalevillains.fandom.com/wiki/Laverna_(Barbie:_Fairytopia)?oldid=187799"
Community content is available under CC-BY-SA unless otherwise noted.