She, along with the rest of Team Dim Sun uses Miniremo units to control the minds of Pokemon in the region of Almia. She helps in the construction of the Incredible Machine, a device that, once activated, will hypnotize all the Pokemon in the Almia region.

Lavana is a very cruel and evil woman. She is willing to anything to complete her evil missions for Team Dim Sun, even if it's kidnapping and hurting small children. She also has a wild temper and will go into a rage if her underlings fail her.

She is first seen in an issue of Almia Times battling the players ally, Keith on top of the Fiore Temple, using an Infernape. She mentioned by Dim Sun Grunts. One says she is known to "[blow] up in a rage for no reason", another says he would like Lavana as a boss because "She's so passionate. Like a volcano..." and that she is the only boss that is a lady.

She first encounters the player inside the Volcano Cave, trying to find the Red Gem with her Crimson Unit. Before she attacks the player, she sends her two female admins to attack him first. When they fail, she lashes out at them and then attacks the ranger in a fit of rage. She uses her mind-controlled Infernape controlled by her Miniremo unit Once the ranger defeats her, she escapes claiming the heat from the volcano ruined her make-up.

She makes another appearance later in the game with her fellow admins breaking into the Ranger Base to kidnap Issac (a scientist who used to work for Altru Inc, before they were discovered to be a part of Team Dim Sun). Lavana and the rest of Team Dim Sun needs him to complete the Incredible Machine, a device that, once activated, will control the minds of every Pokemon in the Almia region, essentially making Team Dim Sun the rulers of the region. They use explosives to blow up a wall of the base. While Ice (one of the other Dim Sun Admins) tried to convince Issac to re-join, Lavana threatens him with the safety of his sister, pinching her as a "demonstration" saying if he doesn't come, she will "get more than a pinch".

At Team Dim Sun's base of operations Lavana attacks Keith, making him fly off the tower. Once Lavana notices the Incredible Machine is activated, she sends her two female admins to attack the player while she leaves to prepare. Lavana encounters the players trying to destroy the Incredible Machine and attacks them with her Magmortar. She appears with the other members of the Sinis Trio for one final full frontal attack against the players. After they are defeated, she flees and is never seen again.

Lavana's outfit is entirely pink. She wears a plastic, pink miniskirt and a plastic, skin-tight, pink top that shows off her breast and midriff. She wears pink, high-heel boots that go up to her knees. She also has gloves that are in a lighter shade of pink from the rest of her outfit. She has pink hair that is done in a pony tail.

Lavana appears in Darkrai Mission Story: Pokemon Ranger Vatonnage - the Comic where her and Ice removed the Three Gems from the Shadow Crystal to make the machine take over the minds of Pokemon again. Ice, freezes the rangers in place, leaving them vulnerable. Lavana then presents to the rangers the Pokemon she has under her control with her Miniremo. The rangers manage to free themselves and smash Lavana's Miniremo unit.

She also makes an appearance in a Japanese magazine giving tips on how to play Pokemon Ranger: Shadows of Almia.

Lavana in the Almia Times

Lavana and her two evil minions.

Lavana with her Magmortar 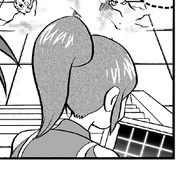 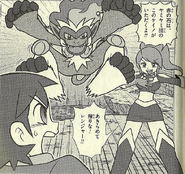 Lavana attacking the player with her Infernape. 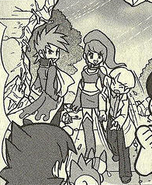 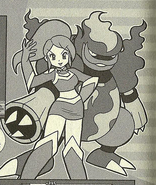 Lavana with her Magmortar.

Lavana's evil sexy pose.
Add a photo to this gallery
Retrieved from "https://femalevillains.fandom.com/wiki/Lavana_(Pok%C3%A9mon_Ranger:_Shadows_of_Almia)?oldid=53356"
Community content is available under CC-BY-SA unless otherwise noted.