The Female Villains Wiki
Register
Don't have an account?
Sign In
in: 2010s, Betrayer, Callous,
and 24 more

Laurie (Diana Gettinger) is the main villainess from "Gun Twisted," episode 2.02 of Femme Fatales (airdate June 1, 2012). She was shown at a shooting range firing shots when she is approached by Bart, a career criminal who was doing the same.

Following their encounter, the pair went to Bart's place, where Bart revealed that he had participated in a bank robbery, which ended with his partner being busted. After conversing, Laurie and Bart engaged in a sexual tryst; and later vented about how she lost her job as a bank teller. She stated that Sara, the bank's assistant manager, set her up to be fired due to her belief that Laurie was attempting to sleep with the bank manager, Willoughby Flagler. With that, Bart decided that he and Laurie should rob her bank as revenge, stating that it would be perfect due to Laurie's inside knowledge.

The next day, Bart and Laurie entered the bank fully armed and donning masks, with the former taking the guard's gun. While Bart forced Flagler to hand over various amounts of money, Laurie fired shots and killed all of the customers, including Sara, much to Bart's shock. She later unmasked and panicked over what she had done, leading to Flagler recognizing Laurie. Following this, Bart shot and killed Flagler so that no one could identify them as the robbers, but at that moment, Laurie shot Bart from behind and later revealed she set him up. In addition, the villainess motioned for Sara to get up, revealing that Sara was not only alive and in on the scheme, but that she and Laurie were lovers.

Laurie revealed everything to Bart as he lay dying; stating that she encountered Sara in Flagler's office while working late one night. She knew that Sara had a crush on her, prompting Laurie to undress and seduce Sara. The women engaged in a heated sexual tryst, and during their encounter, they began colluding to rob their own bank. The scheme involved Laurie seeking out a known criminal (Bart) and manipulating him into helping her rob the bank; setting him up as the sole culprit while doing so. After Bart passed on, Laurie left Sara to play the role of the sole survivor and finger Bart as the robber and killer. Their plan was successful, but at episode's end, the evil Laurie resurfaced at the shooting range--intending to seduce yet another victim.

Laurie in her disguise 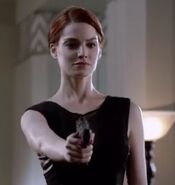 Laurie and Sara revealed as lovers and co-conspirators