Start a Wiki
watch 01:51
The Loop (TV)
Do you like this video?
'Laura Corman (Mary Crosby) is the main villainess from "Tainted Lady," the penultimate episode of Murder, She Wrotes seventh season (airdate May 5, 1991). She is a nurse for Dr. John Logan in the town of Dry Wells, but she is also a murderess, having killed her husband, Ross Corman. After catching Ross flirting with diner owner (and old flame) Ellen Wicker, Laura put her plan into action; poisoning a bottle of wine knowing that he would drink it. Ross does just that while Laura acted flirtatious towards him, and he eventually succumbs to the arsenic poisoning.

After Ross' death, Laura splashed wine on the body and then called Sheriff Deloy Hays to the scene. When she was about to be exposed by Jessica Fletcher, Laura rushed to her home and flushed the poison down the toilet; however, Jessica stated that it wouldn't do any good, as the container could be used as evidence. Laura eventually confessed to killing Ross, blaming his excessive spending on other women for the fact that she's working as a nurse. She stated that she had planned to kill him for a while, but seeing her with Ellen finally pushed her. Planting wine stains on Ross and calling Sheriff Hays was part of Laura's evil plan to frame Ellen, because she knew that Hays' prejudice against Ellen would cloud his judgment (which it did). Laura was later arrested for her husband's murder. 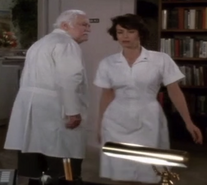 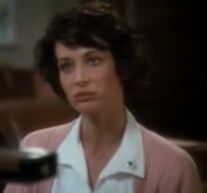 Add a photo to this gallery
Retrieved from "https://femalevillains.fandom.com/wiki/Laura_Corman_(Murder,_She_Wrote)?oldid=107257"
Community content is available under CC-BY-SA unless otherwise noted.