Laura (Courtney Ford) was a villainess from "Rewind", episode 1.02 of Fox's Human Target (airdate January 20, 2010). She was introduced as a stewardess working on Flight 234, a flight travelling from San Francisco to Seattle.

One of the passengers on the flight was the famed freelance hacker "Casper" (later identified as Brooke Hammel), having been hired by a cyber-security business to help test their defenses. The company's head, Phil Tennant, hired professional bodyguard Christopher Chance to go undercover on the plane to provide protection to the hacker, as Casper had recently uncovered a "skeleton key" that could be used to bypass any online security measure.

During the flight, Chance manages to subdue an assassin (later identified as Shaun) hired to kill Casper, but the struggle ends up rupturing the fuel tank to the plane and starting a fire that jeopardizing the flight. Laura assists Chance in putting out the fire, even holding an Air Marshal at gunpoint when he tried to stop Chance (under the belief that he was behind the plane being damaged). But unbeknownst to Chance at the time, Laura was actually a villainous assassin hired by Nick Chepekian to kill Casper and retrieve the proverbial skeleton key, having already killed a stewardess to take her place on the flight.

After working together to flip the plane upside down to put out the fire, Laura goes with Chance to replace the plane's computer with Brooke's laptop in order to turn the plane back over. But before crawling into the fuselage and connecting the laptop, Laura gave Shaun one of her hairclips, which he later used to undo his handcuffs as Laura climbed into the fuselage with Chance to connect the laptop. But after Shaun was subdued as he attempts to sneak up on Chance's partner Laverne Winston, Chance revealed to Laura that he'd uncovered her villainous secret and disarmed her by pointing her own gun at her, after Laura went to grab it in an attempt to kill Chance. Chance went on to attempt to convince Laura to surrender and come work for him, referencing how she'd previously said she was looking for a "career change" and sympathizing with Laura due to having been an assassin in the past. In response, however, Laura revealed how she'd killed a woman to get on the flight and say that being an assassin was "what she did".

The evil Laura later attacked Chance as the plane began to be flipped rightside up again, with Laura attempting to shove Chance to his death when he was left dangling from the landing gear. Before she could, however, Chance managed to inject Laura with the ketamine meant for "Casper", allowing him to pull himself to safety while the disoriented Laura slipped. Chance managed to grab Laura and attempted to pull Laura up, only for the villainess to simply ask Chance to tell her his name before letting go of his hand and falling to her death. 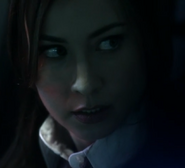 Laura during her villainous reveal 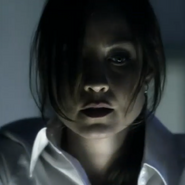 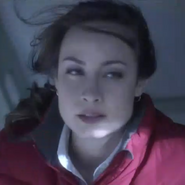 Laura shortly before falling to her death
Add a photo to this gallery
Retrieved from "https://femalevillains.fandom.com/wiki/Laura_(Human_Target)?oldid=194223"
Community content is available under CC-BY-SA unless otherwise noted.