Start a Wiki
watch 01:51
The Loop (TV)
Do you like this video?
Larissa Diaz (Lesley-Ann Brandt) was a villainess in the 2014 episode "Lovecraft" for the TV series "Gotham".

Larissa diaz, who is also known as Copperhead, is an assassin who was sent to kill both Selina Kyle and Dick Lovecraft.  She was hired by parties unknown due to Kyle and Lovecraft having some knowledge over who killed Thomas and Martha Wayne.

Larissa is first seen observing Wayne Manor.  When questioned by a gardner, she chokes him and has him killed by her associates.  Then she smears blood over her face.  Larissa knocks on the door in which the batuler and Bruce Wayne's guardian Alfred Pennyworth answers.  Larissa pretends to be the victim of an accident.  When Wayne and her target Selina Kyle (Carmen Bicodova) ask what is going on, both Diaz and Selina lock eyes.  Alfred works out that something is wrong, and tells the children to run.  He fights Diaz and her associates.  Diaz manages to get away and Alfred takes out a couple of her associates.  Bruce and Selina manage to escape to Gotham City.

Larissa is later seen looking for Dick Lovecraft, who was in the process of telling Detective James Gordon something vital about the murder of Thomas and Martha Wayne.  Larissa told Gordon if he stood down she would not hurt him.  Gordon feigned surrender and was knocked out by her associate.

Larissa then took his gun and shot Lovecraft dead with it,  She took the vital files relating to the Wayne murders with her.  She then was contacted by a fence known as Clyde who managed to capture Selina and Bruce.  As they tried to escape Alfred and Gordon showed up and got into a firefight with her henchmen.

Larissa questioned Bruce, but he refused, saying Selina had escaped.  Spotting Alfred, Diaz fled, but not before telling Bruce not to confuse bravery with good sense.

This was the last that was seen of Larissa.  Selina Kylie later retracted her statement of seeing the man who killed Thomas and Martha, and so it appears that Larissa was effective. 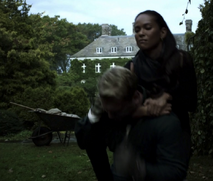 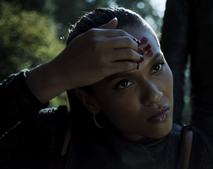 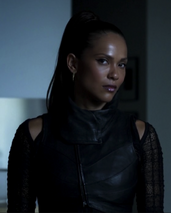 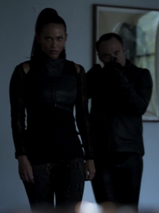 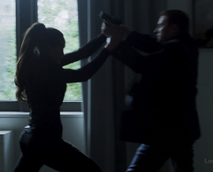 Add a photo to this gallery
Retrieved from "https://femalevillains.fandom.com/wiki/Larissa_Diaz_(Gotham)?oldid=124561"
Community content is available under CC-BY-SA unless otherwise noted.