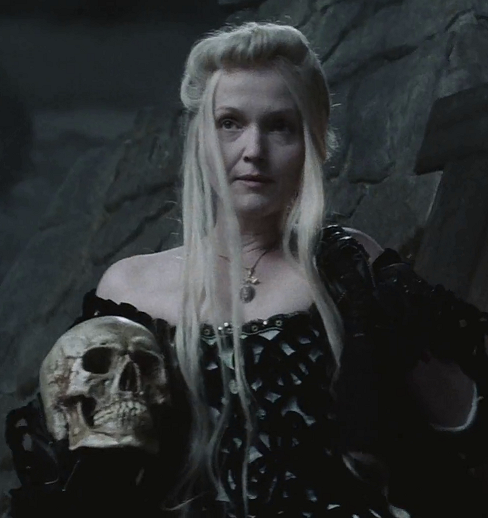 Lady Van Tassel (Miranda Richardson) is the primary antagonist of Tim Burton's 1999 film, "Sleepy Hollow". She is a murderous witch who summoned the Headless Horseman, the ghost of a Hessian mercenary killed during the American War of Independence.

As children, she and her sister were evicted from their homes and eventually forced to seek refuge in the woods. After both their parents died, they witnessed the execution of the Hessian, whereupon Lady Van Tassel sold her soul to Satan, becoming a witch. She secretly killed a nurse and married the nurse's husband, and summoned the Hessian to kill her enemies, including the Van Garrets and Van Tassels, in the hopes of being able to claim both their estates.

However, before she could have the Horsemen kill her last surviving target - her stepdaughter, Katrina Van Tassel - visiting New York police constable Ichabod Crane thwarted her by taking the Horseman's skull, throwing it to him, and thus allowing him to break Lady Van Tassel's curse. Free from her control, he pulled her into Hell to fulfil her end of her bargain with Satan.

Retrieved from "https://femalevillains.fandom.com/wiki/Lady_Van_Tassel_(Sleepy_Hollow)?oldid=205351"
Community content is available under CC-BY-SA unless otherwise noted.