The Lady Vampire is the disguise of notorious jewel thief Lefty Callahan, who was transfered to San Quentin after her arrest. She appeared as the villainess at the Alcatraz prison twice; first to scare Shaggy and Scooby and the second time inside the prison in front of the rest of the gang, with the exception of Daphne, who was not feeling well.

Regarding her appearance, the Lady Vampire donned a long blue dress and a purple cloak, but more notably, she had long red hair, which gave her a moderate resemblance to Daphne. Because of this, and Daphne's absences, Shaggy and Scooby actually believed that Daphne was the Lady Vampire. In fact, Shaggy, Scooby, and Scrappy mistakenly believe to have seen Daphne at the marina and follow her, only to see that it is, in actuality, the evil Lady Vampire, who cackles evilly at the trio and hisses at them. The Lady Vampire is unmasked and revealed as Lefty Callahan, who also appeared in another disguise:  an elderly woman named Mrs. Cornell. Lefty donned the disguises to search for the jewels she stole in her previous heist, but once she was exposed by the gang, she was arrested again. 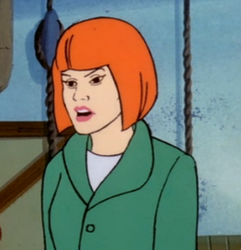 The Lady Vampire revealed as Lefty Callahan
Add a photo to this gallery
Retrieved from "https://femalevillains.fandom.com/wiki/Lady_Vampire_of_the_Bay_(Scooby-Doo_%26_Scrappy-Doo)?oldid=69972"
Community content is available under CC-BY-SA unless otherwise noted.