Start a Wiki
watch 01:51
The Loop (TV)
Do you like this video?
Lady Sylvia Marsh (Amanda Donohoe) was the main antagonist in the 1988 British horror film, "The Lair of the White Worm", which was loosely based the Bram Stoker novel of the same name and drawing upon the English legend of the Lambton Worm. The film was written and directed by Ken Russell.

Angus Flint a Scottish archaeology student uncovers the skull of a large snake at the site of a convent at the Derbyshire Bed and Breakfast run by the Trent sisters, Mary and Eve (Catherine Oxenberg).  He believes it may be connected to the local legend of the d'Amton Worm, a mythical snake-like creature from ages past said to have been slain in Stonerich Cavern by John d'Ampton, the ancestor of the current Lord of the Manor, James d'Ampton (Hugh Grant).

When a pocket watch is discovered in Stonerich Cavern, James believes that the worm may be more than just a legend.  The watch belonged to the Trent sisters' father, who disappeared a year earlier near Temple House, the stately home of the beautiful and seductive Lady Sylvia Marsh.

As it is learned, the enigmatic Lady Sylvia Marsh is the immortal priestess to the snake god Dionin.  The snake roams the underground caves which connect Temple House with Stonerich Cavern.

Sylvia steals the skull and later abducts virginal Eve Trent to be the latest sacrificial offering to her snake-god.  However, her actions are discovered and archeologist Angus with the help of James manages to rescue Eve and destroy both Sylvia and the giant worm.

Prior to Sylvia's death, she was able to bite Angus, and Angus finds himself cursed to carry on the vampiric, snake-like condition.

Lady Sylvia picks up a Boy Scout on a rainy evening.

... and takes him to her opulent castle home

She seduces him in the bath... 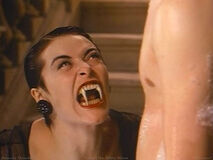 Lady Sylvia rises from a basket like a snake.

In James' weird dream, Sylvia and Eve are catfighting stewardesses.

Lady Sylvia waits in a tree to seduce the virginal Eve.

In a trance, Eve is toyed with by Lady Sylvia.

Finally, the sacrifice of Eve to the giant white worm.

Sylvia plans an elaborate ceremony before the sacrifice...

Eve's virginity will first be sacrificed with THIS! 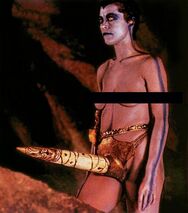 Fortunately for Eve, there is no time for that. 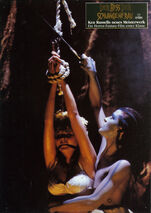 Sylvia tries to cut the rope which will drop Eve into the giant worm's gaping mouth!

But Sylvia slips and falls to her doom into the jaw of the giant worm.

A hand grenade tossed into the bloody mouth destroys both the worm and Lady Sylvia.
Add a photo to this gallery
Retrieved from "https://femalevillains.fandom.com/wiki/Lady_Sylvia_Marsh_(Lair_of_the_White_Worm)?oldid=185237"
Community content is available under CC-BY-SA unless otherwise noted.