Lady Spectre is the villainess in the 2019 HK fantasy movie Seven Swords 2: Bone of the Godmaker.

Lady Spectre is the haughty commander of an evil cult seeking to revive an ancient devil currently sealed away by four holy spirits using the seven magic swords of the realm. She has already obtained five of the seven swords, and has found the last two being held by the heroines of the movie. Consequently, the heroines want to use the two magic swords at their disposal to free the holy spirits and banish the devil away. She wears a long black cape and an embroidered gown.

Lady Spectre spends most of the movie on her dark throne - ordering her bodyguards and henchmen to find and kill the heroines so she can take their magic swords. However, time and time again, her henchmen return with failure upon failure, each time the heroines slipping away by a smaller margin, much to her aggravation. Her henchmen still can't catch them despite her frustration and ordering her men's life to be on the line. Eventually she leads the remainder of her men to find and capture one of the heroines and take them away to her lair.

Lady Spectre is killed in humiliating fashion after her prisoners revolt - she desperately orders her remaining followers to stop them but gets caught in a catfight with the two main heroines. She makes a cowardly attempt to flee by disappearing into the shadows, but the heroines grab her cape as it billows in midair, choking her to the ground before they plunge her own sword back into her lifeless body.

Appalled at the audacity of her followers to be defeated 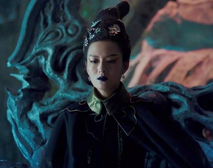 Confident in herself before she personally rides off into battle

Finally, they are caught in front of her

Caught by the heroine and other escaping prisoners

A confident stance, but she doesn't last long

Retrieved from "https://femalevillains.fandom.com/wiki/Lady_Spectre_(Seven_Swords_2:_Bone_of_the_Godmaker)?oldid=197498"
Community content is available under CC-BY-SA unless otherwise noted.