Lady Qiao is a villainess from the Fansadox story A Tale of Chinese Slavery.

She is a woman living in Shanghai who part of an underground society that traffics foreign women from abroad and enslaves them. At a club that she hosted a snuff club where her and several like-minded individuals sexually abused their slaves. Lady Qiao was one of two people, the other being Chyou who brought her new slave Hannah, that brought her personal slave with her to a VIP room. While she sat in the crowd she had her slave, a large naked voluptuous red-hair kneeling next to her leashed like a dog. The main attraction of today show was a custom guillotine for breasts. Lady Qiao tired of her slave, due to her performing poorly in oral sex, willingly dragged her slave to the stage despite the pleas of the woman. Her slave resisted being taken to the machine but a male bouncer soon secured her to the contraption.The speaker then proceeded to flip the guillotine bring the blade on the woman's chest, amputating her breasts, killing her to the delight of the crowd.

Later Chyou after getting married to a Zhang Wei later decided to sell Hannah after thoroughly breaking the American girl into a submissive slave. Hannah would be sold to Lady Qiao who was going to need new meat for a human blender. 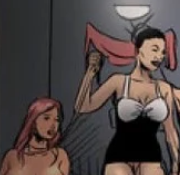 Lady Qiao 3.png
Add a photo to this gallery
Retrieved from "https://femalevillains.fandom.com/wiki/Lady_Qiao_(A_Tale_of_Chinese_Slavery)?oldid=194626"
Community content is available under CC-BY-SA unless otherwise noted.