Lady Kale, Princess of Avalon is an evil witch who is the antagonist of the first season of the 1995-1996 children's fantasy animated series Princess Gwenevere and the Jewel Riders (also known as Starla and the Jewel Riders) as well as secondary villainess of the second season, voiced by Corinne Orr. She and the same show's Morgana both later inspired the character of the Dark Sorceress in the book series Avalon: Web of Magic.

Lady Kale is a banished member of the royal family of the fairtytale-style magical kingdom of Avalon. She is a beautiful but also mean, selfish and cruel twin sister of the reigning Queen Anya—making her an aunt of the series' teenage protagonist Princess Gwenevere (Starla), the leader of the eponymous young girls who are loyal followers of Kale's enemy Merlin.

Princess Kale is twin sister of the Queen Avalon, Anya (the difference is Anya is blonde and blue-eyed, also wearing the same but blue earrings). Having been banished from the royal Crystal Palace, Kale now dwells alone in her dark Castle Thornwoods. She is vengeful and deeply envious of both Anya's throne and the powers of the good wizard Merlin, and firmly believes Avalon rightfully belongs to her.

Having discovered a mysterious jewel of great evil magic that she named the Dark Stone, Lady Kale seeks to master all the magic of Avalon, destroy her sworn enemy Merlin, and forever plunge the realm into darkness. For the first time in Avalon's history since the fall of Morgana and the ancient wizards, the whole kingdom is in peril—and so the three young Jewel Riders (Queen Anya's daughter Princess Gwenevere/Starla, Fallon and Tamara), aided by their friends, embark on a grand adventure to thwart Kale's bid for power and free the realm of her menace.

Serving Kale are three evil animal stooges (all male), consisting of the huge and nasty dragon Grimm and a duo of mischievous pet dweasels (dino-weasels) named Rufus and Twig, and also some human followers including the female Outlaw. Kale loves Grimm but is very abusive toward the bumbling and cowardly dweasels. Rufus and Grimm still serve "the witchy one" faithfully, and also become magically bonded with her through the Dark Stone, allowing them to communicate.

In several episodes, Lady Kale tries to corrupt her good niece, sometimes almost succeeding, but she always fails at that. It is a personal ambition of the Jewel Rider Fallon to be the one who defeated Kale, and she will often fearlessly confront the powerful and strong Kale head-on but is also good at tricking her in various ways.

During the conclusion of the first season in the episode "Full Circle", the self-proclaimed Queen Kale tries to finally rid of Merlin completely and then take control of all of the magic of Avalon after seizing the all seven lost Crown Jewels, the powerful magic gems that the Jewel Riders have been searching for and collecting while competing with Kale for the control over them. But Merlin had deceived her, and the girls had the magic already tuned to them, and so the combined power of the Crown Jewels and the highly magical Crystal Palace turns against Kale who is trapped, shrunk and vaporized into "fairy dust". And so the first season ends with Kale seemingly utterly defeated as the peace in the kingdom is restored.

At the start of the second season, however, Lady Kale is unexpectedly brought back to life. Reverted to her physical form, she returns to Avalon alongside the ancient evil sorceress Morgana (who unintentionally rescued Kale while using the Dark Stone, which had originally belonged to Morgana) as her very unwilling and rebellious sidekick in the new quest for the even more powerful magic stones, the Wizard Jewels. In the end, Princess Gwenevere is given the Staff of Avalon so she can finally defeat her evil aunt once and for all in the episode "Lady of the Lake" ("Spirit of Avalon"). Gwen (aided by her new boyfriend Ian) then uses it and her own Sun Stone to activate the powers of the collected Wizard Jewels, casting a spell that leaves Kale and her animal minions all turned into crystal statues before the decisive battle against Morgana that also results in the destruction of the Dark Stone. 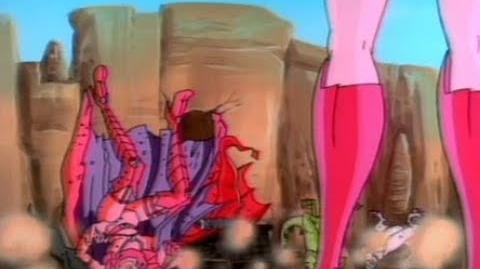 Retrieved from "https://femalevillains.fandom.com/wiki/Lady_Kale_(Jewel_Riders)?oldid=222366"
Community content is available under CC-BY-SA unless otherwise noted.