Lady Die was a popular rock star who was in the midst of her anticipated North America tour. However, it is revealed that Lady Die is actually an elderly woman named Sarah Barell, who went missing some time before the episode's events. The revelation was made by Birdie, a friend of Sarah's, when she noticed Sarah's bracelet in the possession of a young girl named Kristen.

Sarah obtained possession of a cursed teacup, which was purchased by her deceased brother, Fat Eddie. The cup was decorated with "Swapper's Ivy," which comes to life and kills whoever drinks out of the cup, with the owner receiving youth.

Sarah used the cup to become the evil Lady Die, and she was shown early in the episode, in a hooded cloak hiding her face, using the cup on a homeless young lady. Lady Die's next victim was a homeless man, and it was in this scene that Kristen appeared, leading to her receiving the bracelet. The scene also marked Lady Die's heel turn, as she is officially revealed as the villainess when she is shown flashing an evil gleam as she watches the ivy kill her intended victim.

Lady Die later participated in a radio interview when she suddenly saw signs of aging when she looked in her mirror. She rushed out to commit her latest villainous deed, but she suddenly noticed that her cup was missing, taken by Kristen. Micki and Ryan found Kristen with the cup and took her to Curious Goods, while a panicked Lady Die frantically searched for the cup, all while continuing to age. Birdie, wanting to experience youth again like Sarah did, took the cup from the shop, but she couldn't bring herself to use it. Once Lady Die saw Birdie with the cup, the villainess, now an old lady, chased after Birdie--eventually knocking her out and taking the teacup. She attempted to use it on another victim, but the "victim" turned out to be Jack in disguise, and he reclaimed the cup. Lady Die still intended to continue with the tour, but when her manager called for her, she was shown as an aged old crone. Lady Die collapsed from her trailer, dying of old age.

Lady Die turning heel and revealing herself as the cloaked killer 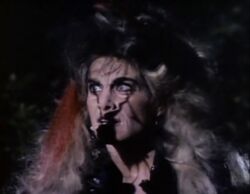 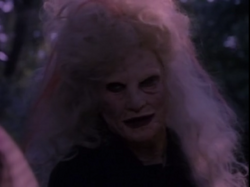 Lady Die as an old woman 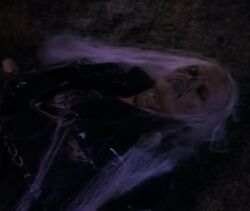 Lady Die aged to death
Add a photo to this gallery

Retrieved from "https://femalevillains.fandom.com/wiki/Lady_Die_(Friday_the_13th:_The_Series)?oldid=174610"
Community content is available under CC-BY-SA unless otherwise noted.