Start a Wiki
watch 01:48
The Loop (TV)
Do you like this video?
Kyla Wilde (Lucy Loken) is the villainess of the 2018 film My Teacher, My Obsession (alternately titled Dad Crush). She was an 18-year-old high school student and aspiring photographer, as well as the daughter of Jess Wilde. Her backstory revealed that her father left her and her mother when she was six, leading her to have an affair with her history teacher.

The film's present events had Kyla befriending Riley Sumner, a new student at her school and the daughter of the school's new English teacher Chris Sumner. Kyla was quickly shown to have developed a crush on Chris, leading her to become jealous at fellow student Tricia Wilson for her bold attempts to flirt with Chris. Kyla also became angry at learning Riley was beginning to befriend Tricia, leading her to claim that Tricia was dangerous and that it was her who had an affair with their history teacher.

Kyla was additionally shocked to learn that her mother had begun dating Chris after meeting him at the grocery store, leading her to interfere with their date by spilling water on Chris so they would cancel their plans to have dinner at their house, and later stopped them from getting intimate by claiming she had seen someone watching her from outside her window. Kyla's friendship with Riley additionally took a hit when she became frustrated at Riley for branching out and finding new friends, though they ultimately reconciled after Kyla opened up to her about her past affair with a teacher and how she was glad Chris treated her mother so well.

But soon after, Kyla sabotaged Chris and Jess' relationship by sending suggestive texts to Chris using a burner cell phone posing as Tricia, leading Jess to break up with Chris upon being shown them by her daughter. After Jess asked Chris to leave her house, Kyla went out to meet Chris in his truck, leading her to begin kissing Chris while claiming he deserved to "be a man" and have what he wanted without feeling sorry. Having previously printed out provoactive photos of herself and put them in her locker to look like someone had pranked her, Kyla planted the phone she used to take the pictures in Tricia's locker, making it appear that she had been behind the act and resulting in her arrest. Having eliminated Tricia as a perceived threat, Kyla meet with Chris in his bedroom during Riley's 18th birthday party, seducing him into beginning to have sex with her.

But during the tryst, Riley walked in and was horrified to see what was happening, much to Kyla's chagrin. Later on, Kyla attempted to stop Chris from leaving to track down a despondent Riley, becoming upset at Chris for saying Riley was more important to him than her. Kyla also briefly implied that she wasn't of the age of consent, but ultimately revealed that she was before Chris left to find Riley. While he was gone, Kyla picked up a picture of Jess and threw it to the ground as she proclaimed Riley wouldn't take Chris from her, now seeing her former friend as an obstacle in her obsessive quest. The next day in school, Jess arrived and confronted Chris about his tryst with Kyla (having been told about it by Riley) and later confronted her daughter, with Kyla accusing her mother of being jealous and demanding for her to stay out of her way.

Kyla later arranged for a meeting with Tricia at their school, with Tricia blasting Kyla upon arriving for framing her and costing her college scholarships. In response, the evil Kyla challenged Tricia to hit her before proceeding to slap herself twice, much to Tricia's shock. As Riley and Chris arrived at the school, Kyla angrily proclaimed that Chris was hers before breaking her fingers using a chair. While being tended to by Chris, Kyla accused Tricia of attacking her, resulting in her being arrested again. In the hospital, Kyla apologized to Jess for her earlier behavior before asking to say goodbye with Riley and Chris, with Jess allowing her to. While talking with Riley, however, Kyla's attempted apologies were rejected, with Riley lambasting Kyla for using her and seducing her father before informing her that he'd promised to stay away from her for good. Kyla appeared to concede to Riley's words, while also asking her to cover the girls' volleyball game in her absence.

When talking alone with Chris, however, Kyla revealed that she had convinced her mother and Riley that they hadn't started a relationship and that they could now be together in secret, revealing her earlier displays of remorse to be staged. Chris fiercely rejected Kyla's delusional claims and demanded her to stay away from him and Riley, even revealing that he would quit his job at the school when Kyla reminded him he would have to see her every day. Enraged, Kyla escaped the hospital after arming herself with a scalpel and attacked Riley at the school, stabbing her in the stomach as she claimed that she was the only woman Chris could have in his life. The villainess then held Chris hostage with the scalpel in his classroom as she sexually tormented him, implying that she had killed her previous lover for not satisfying her and stating that he would do whatever she said in their "relationship".

Chris finally managed to escape Kyla's grasp by shoving her over his desk, only to be knocked out when Kyla kicked his leg and caused him to strike his head on the desk. Kyla was horrified at what had happened, with a school janitor finding her curled up in a fetal position in the classroom. As he went to get help, however, Kyla rose up and followed him out into the hallway, slitting the man's throat with the scalpel as an injured Riley tried to warn him. Kyla then chased Riley to the school darkroom, cornering her and venomously claiming that only one of them could have Chris and that one of them was destined to die. Riley was able to disarm Kyla with a tray, leading Kyla to attempt to kill Riley by strangling her with her camera strap. Before she could succeed, however, Riley managed to break free by striking Kyla with the camera, later using it to knock her out as she pinned her to the floor.

Kyla was later taken away in an ambulance and presumably arrested (off-screen) for her various crimes; however, the film ended with a hooded figure appearing outside the Sumner house as Riley was leaving for college. The appearance implied that Kyla escaped from custody and maintained her heel persona, while also planning to continue pursuing her obsession. 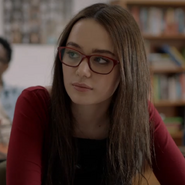 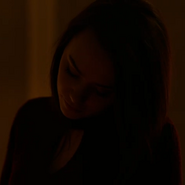 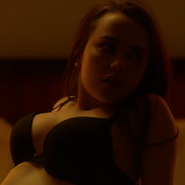 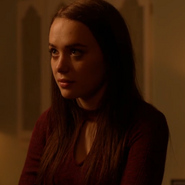 Kyla threatening Chris with a scalpel
Add a photo to this gallery
Retrieved from "https://femalevillains.fandom.com/wiki/Kyla_Wilde_(My_Teacher,_My_Obsession)?oldid=205264"
Community content is available under CC-BY-SA unless otherwise noted.