Kyala is villainess from the anime Highlander: The Search for Vengeance.

Kyala was the only pupil of the Immortal Marcus Octavius. She was a skilled fighter who enjoyed killing. In the year AD 2187, she tried to kill Colin MacLeod, but was mortally wounded by his mortal lover, Dahlia. As soon she revived, Kyala stabbed Dahlia and assumed her dead. With her last strength, Dahlia put a hand grenade in Kyala's mouth. Kyala died in the explosion and her Quickening was lost. 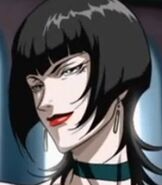 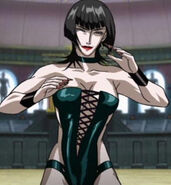 The Empire
Add a photo to this gallery
Retrieved from "https://femalevillains.fandom.com/wiki/Kyala_(Highlander:_The_Search_For_Vengeance)?oldid=156687"
Community content is available under CC-BY-SA unless otherwise noted.