Start a Wiki
watch 01:51
The Loop (TV)
Do you like this video?
Kristal is a professional wrestler best known for her tenures in WWE and TNA, portraying a villainess in both promotions.

Kristal debuted in World Wrestling Entertainment as one of the final eight contestants in the 2005 Diva Search, where she finished in fourth place. She started out as a backstage interviewer on SmackDown in November of that year, but on June 30, 2006, Kristal turned heel after Ashley Massaro was moved to the SmackDown roster. Kristal's heel turn was based on jealousy over Ashley winning the Diva Search contest. She would spend several weeks feuding with Ashley, often aligning with the villainous Michelle McCool in the rivalry. In the latter half of 2006, Kristal was aligned with The Miz, as both of them were feuding with Layla. Kristal was released from WWE in 2007.

Kristal joined TNA in 2009 as the wife of Bobby Lashley, but within months, Kristal became a villainess, and she spent weeks demanding that she and Lashley speak with the higher-ups in TNA. She also adopted a snobby, elitist attitude; often putting down wrestling fans. On the January 14, 2010 edition of Impact, the evil Kristal enlisted Lashley to attack both Jay Lethal and Consequences Creed, and then stated that every member of the TNA roster would be destroyed unless they got what they wanted. Kristal laughed evilly and stated that their attack was only the beginning. However, that was Kristal's last TNA appearance; she was released about a week later. 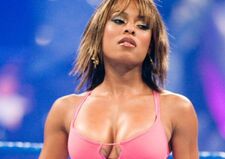 Kristal as a heel in WWE 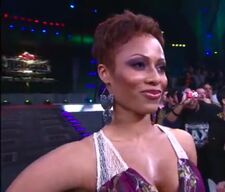 The evil Kristal in TNA
Add a photo to this gallery
Retrieved from "https://femalevillains.fandom.com/wiki/Kristal_(WWE)?oldid=198362"
Community content is available under CC-BY-SA unless otherwise noted.