At the end of the 21st century, Europe is ravaged by years of civil war. The political and social order has broken down. Kleo and her brother, Bosco, maintain a reign of terror over a large city. They have trained an army of martial arts fighters using an ancient book in which the wisdom and combat skills of the old masters is laid out. They stole this book after killing the last master, but not his last disciple, Jonas. With the help of a group of social outcasts, led by the siblings Vincent and Marie, Jonas manages to fight his way through to Bosco and kill him, ending the reign of terror.

Even though Bosco is nominally the leader of this dictatorship, Kleo is the dominant character between the two siblings. They have an incestuous relationship, and Kleo governs her brother by means of that. She enjoys taking captives, only to tie them up and torture them in a sadistic way.

Towards the end of the film, when the heroes are inside the villains’ palace, she once again uses her powers of seduction: when Vincent confronts her, she strips down to her underwear and asks him whether he would prefer to kill her, or to make love to her (although she phrases it a little differently). Taking advantage of the hero's momentary confusion, the wicked Kleo pulls a gun from behind her back and shoots, then leaves him for dead.

As Jonas is about to untie the captured Marie, the villainess interrupts them, still wearing nothing but her underwear. She feels triumphant and mockingly asks which one she should kill first. Suddenly, her expression turns from hubris into one of shock and pain. As the camera zooms out, we see that her chest has been stabbed brutally by a spear thrown from behind by Vincent, alive after all. The blade exits her rib cage exactly between her breasts, and causes a heavily-bleeding, fatal wound. Remarkably, her bra comes out intact. The heroes watch as she lowers the gun and collapses without another word. Before long, she has breathed her last and we see her stretched out on the ground, blood trickling from her mouth, as dead as a dodo. 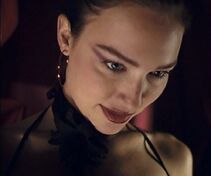 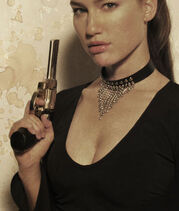 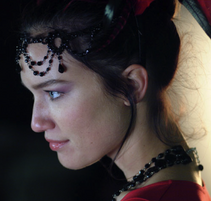 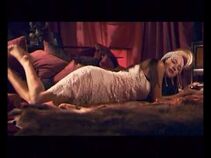 Had it coming
Add a photo to this gallery
Retrieved from "https://femalevillains.fandom.com/wiki/Kleo_(The_Challenge)?oldid=195588"
Community content is available under CC-BY-SA unless otherwise noted.