Start a Wiki
watch 01:38
The Loop (TV)
Do you like this video?
Kitty Young is the villainess of "Bone of Contention", case #26 of Criminal Case: The Conspiracy, the 5th season of the crime solving game Criminal Case (release date July 12, 2018). She was a dog walker who was questioned by the player and Gloria Hayes in regards to the murder of one of her clients, Penny Farrell.

While Kitty initially claimed she was on good terms with Penny, a message was uncovered on Penny's dog's poncho from Kitty that showed the women were in conflict. When questioned regarding the message, Kitty confessed that she came to dislike Penny for criticizing her in regards to how she cared for her dog, proclaiming that she had no right to tell her how to do her job when she had years of dog training experience.

But as revealed in the case's climax, Kitty was in conflict with Penny for another reason as well: she'd uncovered Kitty's side business as a villainous dognapper. In an effort to make more money, Kitty began kidnapping dogs from Maple Heights, holding on to them until the owner offered a monetary reward for their pet's return before returning them. When Penny found out about Kitty's illegal actions and threatened to report her to the police while the two were at the Happy Paws dog shelter, the evil Kitty attacked and killed her, punching Penny unconscious before strangling her with a dog leash.

Kitty left traces of jewelry cleaner on the dog leash she used to kill Penny, with this being among the evidence pointing to Kitty's guilt. Kitty attempted to deny the accusations when confronted by Gloria and the player, only to eventually confess after Gloria came to the assumption that she killed Penny for criticizing her. Kitty went on to fully detail her dognapping side business, arguing that she never hurt the dogs and that her dog walking business didn't pay enough. Kitty also claimed that she hadn't meant to kill Penny when she threatened to turn her in, trying (unsuccessfully) to argue that their fight just "got out of hand". Kitty was arrested and put on trial, where she pled guilty and proclaimed that Penny couldn't mind her own business, while justifying her callous and greedy kidnapping scheme by citing how everyone else in Maple Heights was wealthy. Judge Judith Powell sentenced Kitty to fifteen years in prison, to which the villainess bemoaned that she never should've "messed with stupid dogs and their crazy owners". 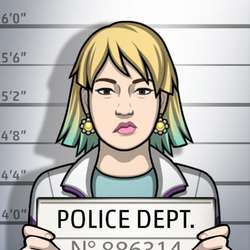 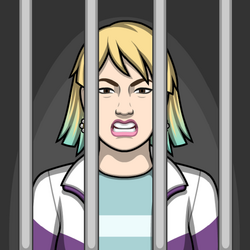 Add a photo to this gallery
Retrieved from "https://femalevillains.fandom.com/wiki/Kitty_Young_(Criminal_Case)?oldid=146170"
Community content is available under CC-BY-SA unless otherwise noted.