Kira (Erika Sanz) is an antagonist in the 2006 Spanish series “Supervillanos”. She appears in 40 episodes, with each episode consisting of three-minute segment. The plan was for the episodes to be downloaded on mobile phones in Spain.

In the series, Kira is a member of a family of extraterrestrials who crash land down on earth.

After crashing down in a junkyard, the first act we see, is when her father liquifies a small dog. Kira finds this amusing. When the junkyard owner confronts them, he has a car drop down upon him, and he too is liquified. Kira and the rest of the family are dressed in black with orange shoulder pads. Kira has orange thigh high boots on, and an orange miniskirt.

Since they can’t get their spaceship to work, they hijack a tax and head into the city. When a policeman hassles them, and demands to see what is in their trunk, he is immediately eaten up by their pet monster. While walking by a department store, they swipe clothes with a mannequin, and Kira is now wearing a sexy red minidress with black boots.

Kira is being followed by a mariachi band. After being fed up with them, she turns and destroys them all. Most of them she places head first into garbage cans, and the last she shoves his guitar through his chest.

The family has an unexpected neighbor couple drop by for a visit. The father calmly shrinks them, and the mother (Yolanda Arestegui) steps on them. Common household items are new things to all of them. As a result, Kira is often seen misusing the items, such as a shower head like a phone, or drinking a bottle of shampoo.

A boy working for a pest control company called Ratatata, first sees Kira, as she is walking out of her apartment, he is immediately smitten with her beauty. Kira being the clutz she is, gets her dress caught in the car antenna, and it is ripped off of her body, revealing her bra and panties. The boy comes over to her, and being used to guys hitting on her, she knocks him with one punch into his work van.

Kira is shoplifting, by placing items of clothing down her blouse. When a male clerk comes over to her, Kira uses her sunglasses, which serves as x-ray vision to survey his private parts. When she sees that he has the “goods”, Kira pulls him into the dressing room and has sex with him. After the session is over, she slaps an innocent girl in the face, leaving a nasty mark on her, and splattering blood on the nearby wall.

Kira has sex with a guy in a photo booth. When she exits, the big line of guys fight over the pictures being released from the despencer.

Kira has sex with a doctor in an elevator. When the doors open, another doctor is forced to take the gas mask from a wheel bound patient to get oxygen.

Kira has landed a job as a dishwasher at a restaurant. On her way to work, she is accidentally sprayed with a giant water hose. As a result, she strips off her dress and walks to work in her bra and panties. At work, she once again uses her x-ray sunglasses to spy on the busboy. She is promptly fired by her boss after having sex in the kitchen. She then gets a job as a street poll person. When a lady is unwilling to fill out her questioner, Kira zaps her mind. The lady does not have the sense to stay out of the street, and gets hit by a van.

Kira is run into on the street by a man carrying a plate full of fish. The fish ends up all over Kira, and she immediately strips down to her bra and panties. She is about to zap the offender with her finger, when she realizes there are witnesses, including the pest control guy who is obsessed with her.

The pest control boy and his boss have gained access to the extra terrestrial’s home. They are performing their duty, when the boy comes into the bathroom while Kira is taking a shower. When Kira finishes with her shower, she pulls back the curtain, revealing her naked body. The only thing covering her are purple stars over her nipples. The two pest control workers are so startled, but at the same time, they do not dare turn away. They are promptly thrown out of the house. The workers wait in their van until Kira leaves the apartment, and they follow her. Kira comes across a blonde girl wearing the exact same red mini-dress as her. Kira looks her up and down as she passes her. The girl is unimpressed, and walks into a local market. Kira decides to comfront the girl, and heads in after her. In one of the aisles she finally locates the girl, and says “There are two things I can’t stand. When someone wears socks with flip-flops and copies my dress”. The blonde girl responds, “Then change yourself”, and walks away. Kira is now perturbed and lifts her finger pointing at the girl. The finger shoots out a laser and the blonde girl begins shrinking until she is only a few inches tall. Kira then walks over and splats her to the ground with her boots, leaving a giant skid mark on the tile. Kira mockingly says “change yourself, change yourself”. She then reaches down and lifts what is remaining of the girl from the bottom of her boot, and walks over to the trash and drops her in. The pest control guy follows after her, looking for her. In the meantime, she has once again used her x-ray glasses to locate the grocery store clerk. She pushes him down and mounts him on a display of toilet paper. When the pest control guy sees her in the act, he storms out without giving her the bouquet of flowers he had intended to give her.

Kira now realizes the power she has over the pest control boy. She seduces him by dropping her purse and picking it up in front of him. The boy runs into a light pole while distracted. When he shows a temper about her playing with his emotions, Kira suddenly becomes attracted to him.

A construction worker drops a bag of concrete in the pathway of Kira. After he makes a hateful comment at Kira, she zaps him. The only thing remaining of him is his eyeballs, and Kira comes back to scold him.

Kira has stolen a pearl necklace from a film set. She is seen by the two pest control guys, have two differing ideas. The boss wants to catch her and turn her into the authorities, and the obsessed boy helps her escape. Kira uses her powers to fly the two of them up to the rooftop.

On the rooftop, the obsessed boy begins to panic. Kira is upset with him, and begins to choke him to death. However, she is distracted by a beeper in his pocket going off. She stops, pulls out her x-ray sunglasses. The glasses reveal to her that he is hung more than any other guy she has seen so far. The two begin to have sex on the rooftop, and in the heat of the moment, Kira flings off the pearl necklace. The necklace lands on the arm of the boys boss, and the police arrest him.

Episode 40 The extraterrestrial family is about to leave earth for good, since their father has fixed their spacecraft. However, just as they arrive, the pest control boss has hijacked their vehicle and taken off, stranding them on earth forever. The last we see of Kira is her dress being ripped off yet again, as four motorcycle punks make fun of her and her now boyfriend. When the punks decide to fight, Kira knocks each one of them up to the height of the nearest building. As the end of the series comes to a conclusion, we see the boss inside the spacecraft out of control and passing one of the motorcycle punks. 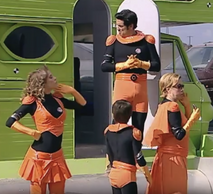 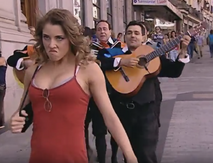 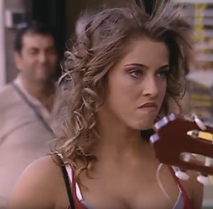 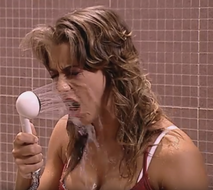 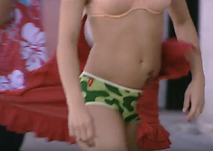 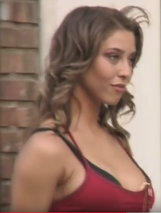 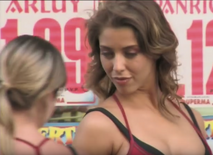 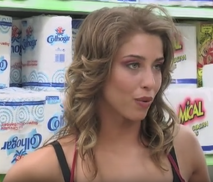 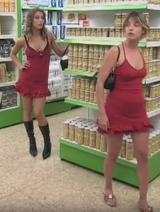 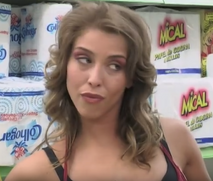 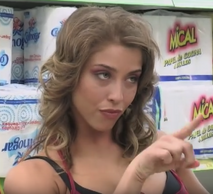 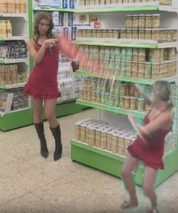 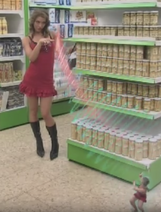 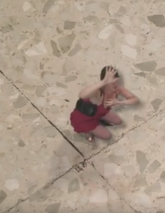 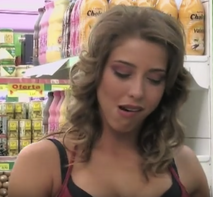 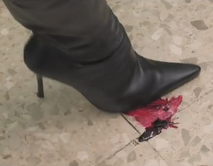 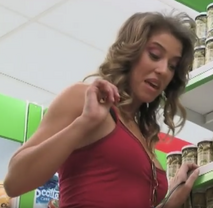 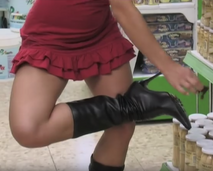 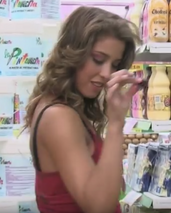 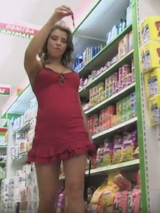 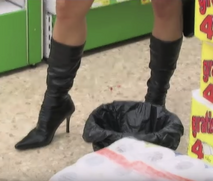 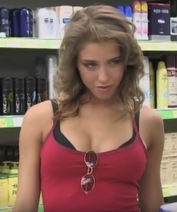 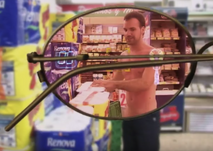 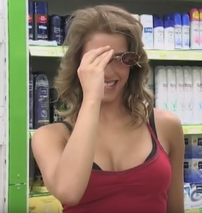 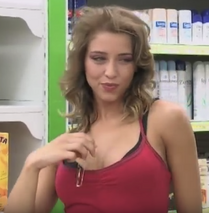 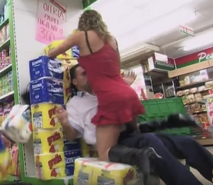 Add a photo to this gallery
Retrieved from "https://femalevillains.fandom.com/wiki/Kira_(Supervillanos)?oldid=219610"
Community content is available under CC-BY-SA unless otherwise noted.